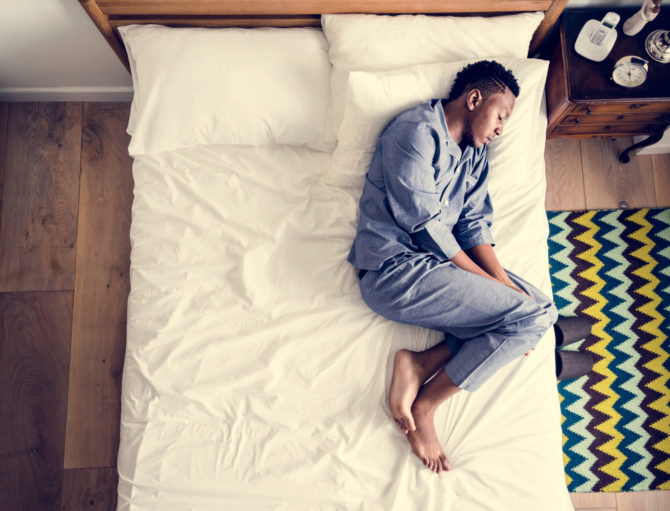 Earlier this week, a young man shared a story about the time a Grindr hookup’s “hulk-sized d*ck” ended up rupturing his airway and sending him to the emergency room.

19-year-old Fredy Alanis spent three days in the hospital, where he posed for this selfie from his hospital bed:

Excuse the bad angle but remember when I sucked a hulk sized dick and ended up in the ER afterwards LMFAO never forget pic.twitter.com/dvaEITTcVs

Related: Man tweets harrowing tale of how another guy’s 10-incher landed him in the ER

But what about gay guys who aren’t into random Grindr hookups or the potential for having their airways ruptured by complete strangers? Where do they fit into the gay community?

A few months ago, 25-year-old Liam told GQ that, despite being in his sexual prime, he hasn’t had sex in over a year.

“I have a lot of anxieties around sex,” he confesses in the interview, “and I feel a lot of pressure and expectation to have sex.”

Liam doesn’t think he has a low libido, he just doesn’t crave sex the same way his peers seem to.

“I certainly feel like there are expectations tied to gay identity surrounding sex,” he says. “I think there’s a perception among my peer group from straight people that they presume that I do have lots of sex.”

22-year-old Craig can relate. He broke up with his boyfriend nine months ago and hasn’t had sex once time since.

“I think we assume that a single gay man is having sex,” he explains. “But nine months down the line, I haven’t had any. None at all.”

He continues, “I think me being gay amplifies some of this pressure. There’s a focus on appearance, categorization, youth, and the like that colors dating and sex in our community.”

But these young men might not as out-of-the-ordinary as they feel.

Related: Apparently “half-night stands” are all the rage among millennials

A 2015 study conduced by researchers from San Diego State University found that millennials are actually having less sex than other generations despite having greater access to it thanks to dating apps and websites.

“Millennials hold the most permissive sexual attitudes of any generation, though they chose to have sex with fewer partners than Gen X’ers did at the same age,” Professor Jean Twenge said.

Some of this may be cultural. But it could also have to do with libido.

According to a recent study, 15% of men reported that they had low interest in sex. This comes after a survey by The Observer in 2014 found that libido (in Britain at least) had decreased overall among men and women, and another study that suggested that low desire in men under 40 has seen a sharp increase in recent years.

Whatever the reason, Justin Duwe, a psychologist, sexologist, and author of The Truth About Chemsex says guys shouldn’t beat themselves up over not wanting to have sex 24/7.

“Men have been led to believe that the more times they have sex, the more masculine they are,” he says. “Many of my clients come to therapy because they are confused. They believe that they should be okay with having casual sex and having it often.”

He adds, “This couldn’t be further from the truth. Sex is a relational experience. Humans need to feel safe, respected, connected and valued in order for their bodies and minds to work appropriately.”

“It’s really f*cking hard to meet the expectations of the sexual life of someone who is gay, or young, or single, or all of the above,” Craig admits. “So I guess it’s no wonder, really, that I’ve ended up feeling disappointed in myself for not getting any.”