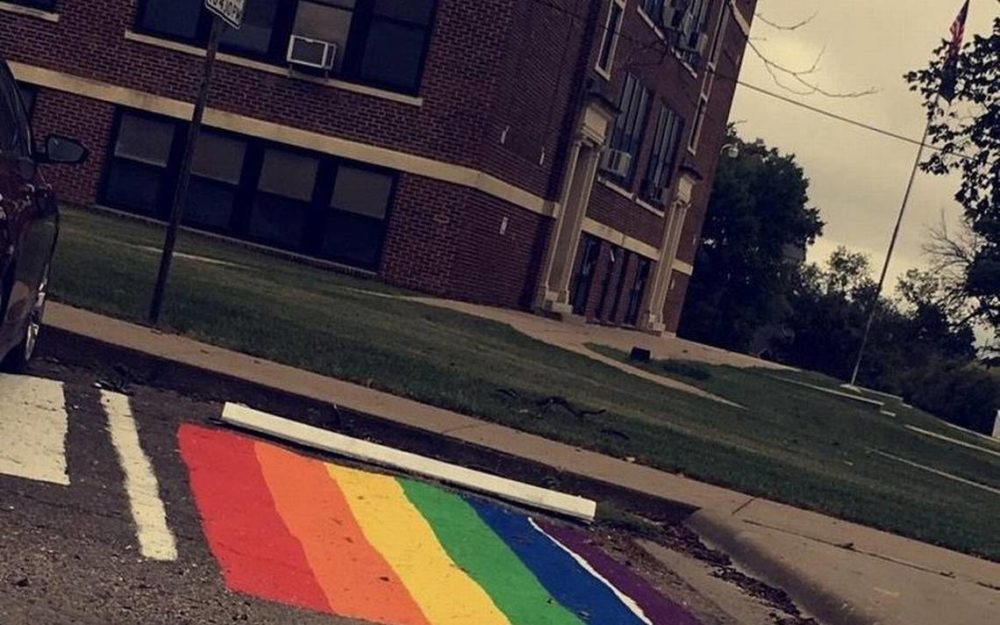 It’s been a tradition at Marion High School for six years: seniors paint their parking stalls, adding a little bit of local color while casually expressing themselves.

But now the tradition at this Kansas school is coming to an abrupt end, following three months of controversy after senior Logan Waner decided to paint his parking space over with a rainbow flag.

One local, Chuck Seifert of Marion, was particularly disgruntled. He attended a school board meeting to voice his displeasure to superintendent Aaron Homburg.

Waner posted a message to Facebook insinuating principal Tod Gordon asked him to change the design. Gordon denies this, saying there aren’t specific guidelines for the painting project, and assuring that he approved Waner’s design beforehand.

The next day, somebody vandalized Waner’s spot by pouring black latex asphalt sealer over the rainbow flag.

“I knew there would be someone who would complain,” Waner tells Kansas City.

“It’s just human instinct. But I didn’t think all the controversy over one man’s complaint was necessary. It did prove a point though. I mostly chose to paint the flag because it’s simple enough and I’m a horrible artist. It described me well enough, so it just felt right.”

“In my opinion, more power to them,” Waner says.

“If it’s how they choose to express themselves, then so be it. For someone to complain over someone else’s views is pure arrogance.”

At a school board meeting, Seifert said the flag constituted “graffiti on public property” and parked over the flag to conceal it.

A protest about the flag in November wound up luring far more counter-protestors than protestors.

Waner attended, kissing his male friend in front of the protestors, other students, and the now-notorious parking spot.

He says nobody is pleased with the school board’s decision and they want the tradition to continue.

“I’ve heard a few people talking about it,” he says, “and they’re not too happy with the decision. But I haven’t been blamed for the decision. I think all the blame is going toward the school board.”