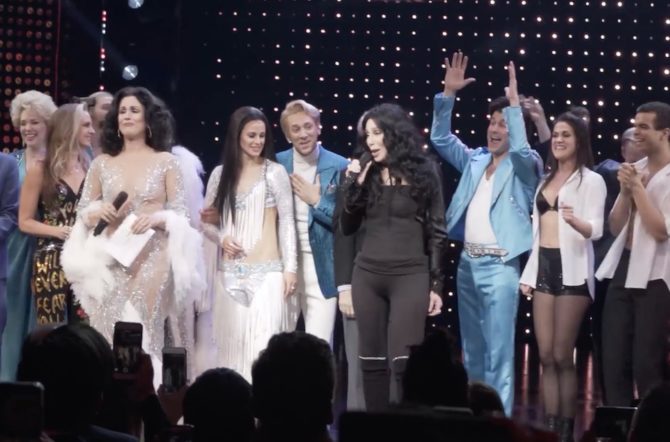 That announcement before live shows to silence your phone and keep it in your pocket isn’t just for kicks, and everyone should know that by now.

Related: Watch what happens when a Trump supporter tried to troll Disney’s ‘Frozen’ on Broadway

At the opening night of “The Cher Show” on Monday, Broadway’s glittering ode to Cher’s life and legacy, West, who was in attendance with wife Kim Kardashian, apparently didn’t get the memo that staring at your glowing phone screen during a play is rude and distracting to the audience and performers alike.

Hey @kanyewest so cool that you’re here at @TheCherShow! If you look up from your cell phone you’ll see we’re doing a show up here. It’s opening night. Kind of a big deal for us. Thanks so much.

The tweet has received over 44k likes and 5k shares, attracting the attention of outlets like New York Times.

For his part, West did reply to Spector with some kind words about the show, which still don’t negate the fact that he should have known to keep his phone tucked away:

the dynamics of Cher and Sonny’s relationship made Kim and I grab each other’s hand and sing “I got you babe”
please pardon my lack of etiquette. We have so much appreciation for the energy you guys put into making this master piece.

The producers of “The Cher Show” issued a lengthy, seven-word statement: “We are happy Kanye enjoyed the show.”

Related: Cher shares an adorable story about the first gay men she ever met

The problem of audiences using their phones during live performances is, of course, nothing new.

West may have been the most high-profile cellphone user in the crowd opening night, but two phones wound up ringing during the show’s second act.

Last week, during a preview of the show, Stephanie J. Block, one of the three actresses starring as Cher, asked an audience member to stop recording her in the middle of a song. She apparently turned off her microphone between lyrics so the full crowd wouldn’t hear the request, which is a whole new skill for Broadway performers to have to master.

Yes, you did… off mic and I even said “please”. https://t.co/KBeaLOcvJA

Get it together, people.

And now without further ado, here’s the real Cher joining the cast for an “If I Could Turn Back Time” encore at curtain call, the only appropriate time to bust out your phone:

Talk about an encore! Ladies and gentlemen: Cher ?