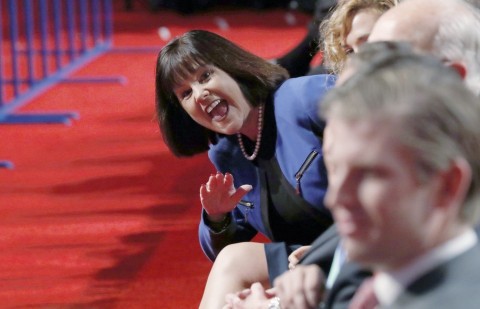 Karen Pence can have a whole stadium of seats.

Mrs. Pence was responding to remarks Buttigieg made Sunday at the Victory Fund LGBTQ brunch where he said, “I wish the Mike Pences of the world would understand, that if you have a problem with who I am, your quarrel is not with me. Your quarrel, sir, is with my creator.”

Naturally, Mother/Karen was none too pleased about this.

“I think in our country we need to understand you shouldn’t be attacked for what your religious beliefs are,” she quipped. “I think it’s helping Pete to get some notoriety by saying that about the vice president.”

Oh, Karen. Mayor Pete already has plenty of notoriety, as evidenced by the $7 million he’s raised for his 2020 presidential campaign. He doesn’t need your husband’s “help” with anything.

Needless to say, Lady #2’s remarks didn’t go over so well on Twitter…

A valid critique of your husband’s record isn’t an attack, @SecondLady. Mike Pence‘s long history of targeting LGBTQ people through legislation and policy is the real attack.https://t.co/bjqffIUDVp

Karen Pence literally works at a school where Pete Buttigieg isn’t allowed to be employed, simply because he’s gay.

Karen Pence is a homophobe and the press should start saying so frankly. https://t.co/cCr5J8oEuP

Wait don’t you believe the earth is flat? pic.twitter.com/IdkhpffbEE

Karen Pence saying that “we don’t attack them for their faith” when Trump *literally* has a travel ban on people of a specific type of faith is peak Christian hypocrisy pic.twitter.com/8Wfj4RsLoD

@SecondLady Your husband literally wants to electrocute the gay out of people. If that’s not an attack on people, because of YOUR religious beliefs, I don’t know what is…Angry stink bug pic.twitter.com/BmmG2M7u22

Says who? If you believe something stupid, dangerous or hurtful, you get criticized. https://t.co/oDcyWjqYsJ

.@SecondLady Karen Pence, you work at a school that bars LGBTQ teachers in a country where employees can still be fired for their sexual orientation/gender identity in 26 states.@PeteButtigieg did not attack your religion. He defended the marginalized.https://t.co/NlaDfeKYNW

Or maybe he legitimately objects to his policies and how they have harmed and are harming LGBTQ people? https://t.co/HRpqPfOyOV via @NewNowNext

Also, Karen Pence, people should not be attacked for their sexual orientation.