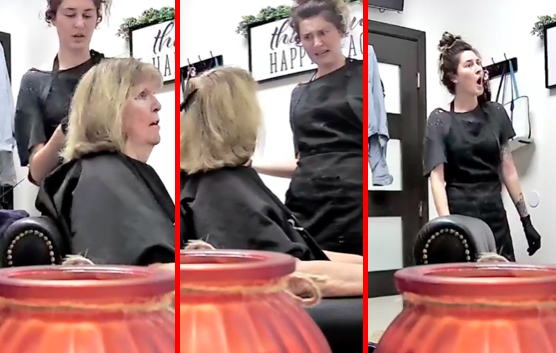 Video of a California woman having a racist hissy fit inside a hair salon has gone viral on social media.

Sharon Spellman is a Los Angeles-based salon owner who recently uploaded security footage of one of her clients making vile remarks about her assistant before throwing a violent temper tantrum in her chair.

Video shows the client, a middle-aged white woman by the name of Robin, refusing to have her roots colored by Spellman’s assistant, Alex, because Alex is Hispanic.

“She’s going to do it exactly how I do it,” Spellman says, encouraging Robin to be “more trusting” of others.

But Robin isn’t having any of it.

When Spellman patiently explains that Alex, who is sitting just a few feet away and can hear everything that is being said, is a paid employee of the salon, Robin threatens to leave if she even lays a finger on her hair.

“I’m not gonna tell you again!” she warns.

Things take a turn for the worst when Spellman tells Robin she’s being disrespectful.

“I came to get my hair done!” Robin quips. To which Spellman responds, “Honestly, Robin, if you don’t want to hear me out and get to the resolution of this you can leave.”

That’s when Robin absolutely loses it. After trying to jab Spellman with her elbow, Spellman tells her to “get the f*ck out.” Then she informs her she’s being recorded.

Realizing her disgusting behavior has been caught on camera, Robin breaks down sobbing, saying she has “a lot of stress in my life,” which apparently caused her to act racist and violent. Then she begs Spellman to please, please, please finish coloring her hair, which still has product in it.

ROBIN IS THE NEW KAREN Y’ALL!!!! Hair Stylists & allll customer service workers, BEWARE! This behavior really is out there!! This all happened because my Hispanic assistant was going to finish her root touch-up!! I do not condone racism, violence, or disrespect!!!! ???? I will always stand up for what is RIGHT! I understand people are going through their own hardships but, WE ALL ARE! That is not an excuse to treat others poorly!!! PS.. I was able to obtain all this footage via my security camera?? Everyone stay safe out there. The world is CRAZY!

Related: Woman launches into antigay tirade against man getting pedicure, screams “Eat my p*ssy! Eat it!”