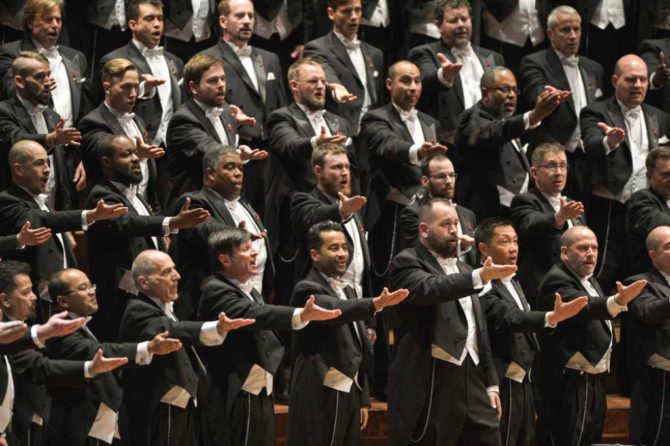 It’s not often we can fit Kathy Griffin, the San Francisco Gay Men’s Chorus and Trump-voting red states into one headline, but today is our lucky day.

This weekend, the SF Gay Men’s Chorus will honor Griffin at their 11th annual Crescendo Gala for “her achievements in LGBTQ equality and for using her voice as an agent of change in the movement.”

Notably, the fundraising efforts of this year’s gala will be put towards the chorus’ Lavender Pen Tour, during which the SFGMC will visit seven cities and numerous small towns in six states including Mississippi, Alabama, Georgia, North Carolina, South Carolina and Tennessee. While in each of these states, the group will host performances and begin a dialogue with community leaders in an effort to support local LGBTQ communities.

Here’s some more info on that tour:

Why lavender, you ask?

Well, there’s a good story behind the name:

Harvey Milk, the first openly gay candidate elected to major office in the U.S., has often been referred to as the patron saint of SFGMC. The Chorus’ first public performance was at the candlelight vigil held on the night of Milk’s assassination. It was as if the baton of activism had been passed on.

In 1977, a year before his death, Harvey sponsored a landmark gay civil rights bill. Mayor George Moscone signed that bill into law with a lavender pen given to him by Harvey. The Lavender Pen remains a symbol of the fight for equality for all and the reason for the tour’s name.

The chorus will be joined on the tour by the Oakland Interfaith Gospel Choir, and we’re looking forward to hearing how it all goes down.

Head here for more info on the Crescendo Gala.

And now, please enjoy this parody of Sam Smith‘s hit “Stay With Me” the SFGMC worked on, titled “Please Go Home”: