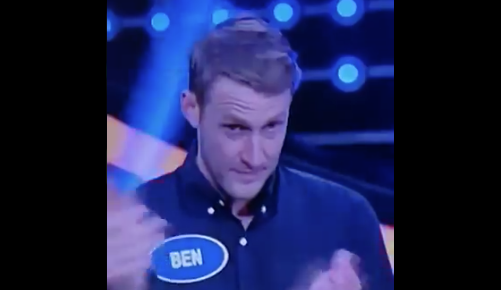 The someone in question was Ben Wierda, and the thing he didn’t notice was, well…

Here is Betsy Devos' nephew, Ben Wierda on “Family Feud” the very moment he realizes how tight his pants are…pic.twitter.com/jkApboOkw0

Wierda, nephew of Betsy DeVos and son-in-law to Kathie Lee Gifford (that’s got to make for some strange family encounters), will likely think about his wardrobe choices a bit more for any future media appearances.

Meanwhile, Andy Cohen asked KLG about the moment during a recent episode of Watch What Happens Live.

Questioned whether she’d seen the clip, Gifford quipped: “Yes, I have, it’s hard to miss it. I’m sorry, but I’m glad it’s not my son. It’s Cassidy‘s (her daughter’s) husband, who I adore, but none of us realized it. We were playing a game, for goodness sakes, and we got very, very excited about it, obviously.”

She also mentioned that Cassidy commented on how “awfully tight” the pants were before the show began filming.