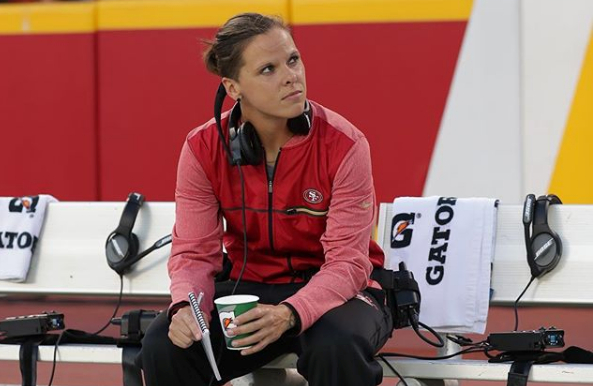 Who She Is: Assistant National Football League coach

What She Did: In 2017, Sowers became only the second female football coach in NFL history when she was hired by the San Francisco 49ers. She also became the first lesbian coach in league history.

Related: Katie Sowers comes out as first lesbian coach in the NFL

Why We’re Proud: It takes a special kind of person to be any kind of first in pro-football, a league known for its brutality and competitiveness, and Sowers shattered a particularly high glass ceiling with grace and dignity.

It was not an easy accomplishment. After a coaching internship with the Atlanta Falcons, San Francisco 49ers coach Kyle Shanahan invited Sowers to join him as an assistant coach. The move inspired awe from observers, starting with Sowers herself because it had not been an easy journey. In an interview with OutSports, she revealed that her gender and sexual orientation had cost her coaching gigs in the past. Sowers describes her mistreatment at Goshen College, a Christian school in Indiana:

As I was finishing college, I actually got turned down from a volunteer coaching job (basketball) because I was a lesbian. I was told “because of your lifestyle, we ask that you do not come around the team.” That moment really impacted me because it was the first time I truly felt judged because of my sexual orientation. I was so passionate about coaching and to feel like my opportunities were limited because of who I loved was hard to deal with. However, without that experience, I would not be where I am today.

He persistence would soon pay off. She landed a job Kansas City Titans in the Women’s Football Alliance. That led to her internship with the Falcons, where she caught the eye of coach Shanahan, at the time one of the NFL’s top offensive coordinators.

“She’s a hard worker, you don’t even notice her because she just goes to work and does what’s asked. Because of that, she’s someone we’d like to keep around,” he told ESPN.

We’re happy she’s around, too.