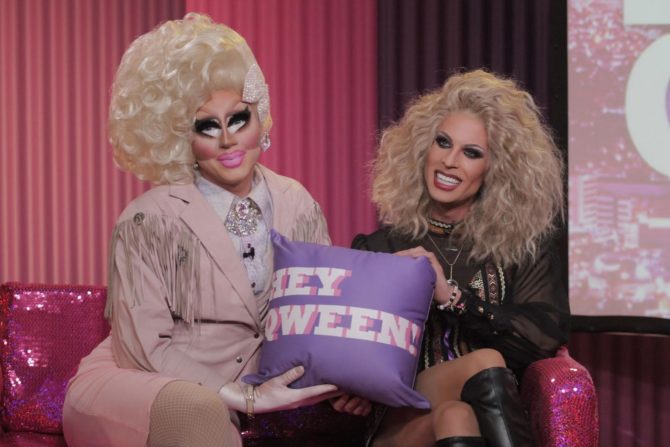 They may not have snatched the crown, but these “RuPaul’s Drag Race” stars are laughing all the way to stardom.

Fan favorites, Trixie Mattel and Katya Zamolodchikova stopped by the gayest show on the internet, Jonny McGovern’s Hey Qween, to spill all the tea on their lives as drag’s most successful losers.

“The real ‘Race’ starts when the show’s over…It doesn’t matter if you don’t win,” said Mattel, explaining the recipe to their success. It’s impossible to deny that these queens have made an impact, beyond the realms of RuPaul’s Emmy award winning show. With their strange, but undeniably hilarious brand of comedy, Trixie and Katya have elevated themselves from reality show contestants to internet superstars.

From their immense social media following to their successful web series, “UNHhhh,” which pulls in hundreds of thousands of views per video, it’s clear that these queens are a force to be reckoned with. Fresh off the set of the “All Stars 2” reunion last year, everyone’s favorite run-of- the-mill Russian bisexual transvestite hooker, Katya, proved once again that being a fan-favorite definitely has its perks.

After just 30 days, Katya raised $74,580 on Kickstarter, more than double the amount she had hoped for, to fund a new act she lovingly calls the “Help Me, I’m Dying” tour. As she describes it, the show will be “a fusion of stand-up comedy, story-telling, video, and live dancerly-ish action and music that talks about what it means to be a woman, from the perspective of a person that dresses up like one.”

So when can we expect to see this Russian beauty and her tiny finger hands in full glory? Well according to Katya there’s no set date, but she confirms that it is coming and that she wants to make it perfect.

And what about Barbie’s prettier, drag queen brother, Trixie Mattel? Well, when she’s not making a surprise cameo in FX’s “American Horror Story” and headlining clubs all around the nation, Trixie’s working hard on her lifelong passion, country music.

If you’ve seen the her old Myspace photos, you know Trixie, real name Brian Firkus, was once a young kid with a guitar and dreams of becoming a singer. “I always wanted to do music, but in case you haven’t noticed there are a million white guys with guitars,” Trixie explains. “So I stopped doing music and started doing drag because it was more lucrative.”

During her “Hey Qween” interview, she revealed that she had just finished recording an album in New York and that she is planning to release it later this year.

According to Trixie, the album will be reminiscent of a Dolly Parton and Porter Wagoner duet album, featuring her male self, Brian, and her drag persona. As for the subject matter of the album, Mattel revealed that she wrote the majority of her album last year after a hard break up.

“All I had was my guitar and a terribly, horribly broken heart so I just wrote music all day,” Trixie explained. “I plan to publicize my breakups and profit from them like other celebrities,” Trixie jokingly added, clearly taking a page from the queen of breakup tracks, Taylor Swift.

Together these queens have cultivated an audience like no other “Ru girl” has before, building up a fan base as supportive as they are ravenous. Whether they’re rambling about nothing on Youtube or lip syncing for their lives on stage, the fans just can’t seem to get enough of their two favorite drag queens.

Watch part one of Trixie and Katya’s interview below and for more fabulous videos head to the Hey Qween Youtube channel: