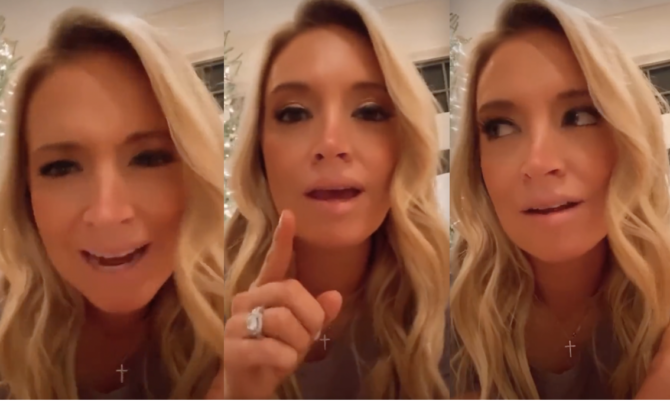 Kayleigh McEnany took a moment of our her very busy schedule of being unemployed to offer Kamala Harris some unsolicited advice about how to be a better Vice President of the United States of America.

McEnany, who is currently promoting her crappy new book, recently posted a video on social media blasting Harris for being mean to her employees and saying she needs to change her behavior ASAP.

Related: Is this the dumbest political “scandal” ever?

“Just be nice to people,” McEnany scolds in the video. “It’s not that hard. Just be nice.”

Irony is deceased forever. Kayleigh McEnany to Kamala Harris: “Just be nice to people. It’s not that hard .. It really grates at my soul when I hear about brutal bosses that don’t appreciate those who sacrifice a lot to come work for them.” pic.twitter.com/bQ8Dqs98yo

Since taking office for less than a year ago, Harris’s office has seen a high amount of employee turnover. Last week, chief spokesperson Symone Sanders revealed she would be leaving at the end of the month. Before that, communications director Ashley Etienne also announced she was resigning.

Related: Kayleigh McEnany’s new colleagues at Fox News call her “truly disgusting” and compare her to a Nazi

Why Harris’ office is seeing so many staff departures right now is unclear. People leave their jobs all the time for all sorts of reasons. But leave it to McEnany, whose boss saw a 92% turnover rate during his single term in office, to assume the absolute worst.

“I just think it’s totally unacceptable,” she says in the video.

Her boss was always so kind to people. Even after they left, he showed nothing but respect and gratitude for their service.

The smear campaign is in full swing…they expect Harris will be president candidate if not ‘24 than ‘28. Preemptive strike just like with H.

The Lord showed her and her boss OUT of the white house in 2021. Praise Jesus.

She just wants to tell a brown woman what to do. @kayleighmcenany had problems telling the truth and she wants to be condescending to Vice President Kamala Harris. Full Blown Karen Mode, no one asked her sh*t

Nobody works harder than Kaylie’s filter

If you are sacrificing for a brutal boss, you might be Devin Nunes. Or Kayleigh McEnany. Or Michael Cohen.

Most ironic statement ever. Her boss tried to give her and 500 others COVID. Look it up.

@kayleighmcenany is this a joke? Your “boss” was the cruelest man to ever occupy the office.

Lol she said she had a soul