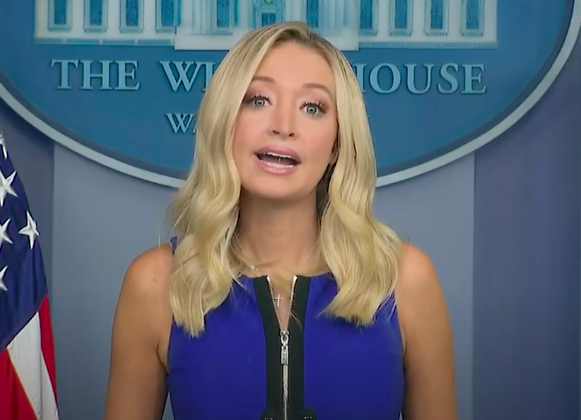 White House press secretary Kayleigh McEnany insists that Donald Trump wasn’t suggesting voters “do anything unlawful” when he encouraged them to commit a felony by voting twice in November’s election.

Speaking to Fox News this morning, McEnany claimed Trump was simply telling supporters to “verify” that their mail-in ballots were counted by showing up to the polls to vote for him a second time.

Trump made the remarks during local TV interview in North Carolina yesterday, saying, “They will vote and then they are going to have to check their vote by going to the poll and voting that way because if it tabulates then they won’t be able to do that. So let them send it in, and let them go vote.”

He made similar remarks earlier in the day when speaking at a MAGA rally the Wilmington airport, telling the crowd, “If it’s as good as they say it is, then obviously they won’t be able to vote. If it isn’t tabulated, they’ll be able to vote. So that’s the way it is. And that’s what they should do.”

Speaking to Fox, McEnany said, “The president is not suggesting anyone do anything unlawful. What he said very clearly there is make sure your vote is tabulated and if it is not, then vote.”

Just like when he retweeted that white power video, he wasn’t being racist.

Or when he launched an all-out assault on LGBTQ equality at the start of his presidency, he wasn’t being homophobic.

Or how he wasn’t hiding in that bunker, he was just “inspecting” it.

Speaking to reporters at the White House this afternoon, McEnany once again claimed Trump was not encouraging unlawful voting.

“The President’s been very clear about this,” she said, “and once again, I’m not surprised, the media’s taking the President out of context.”

Um, except that he literally told people to try to vote twice.

“The president does not condone unlawful voting.”

“Once again—not surprised the media is taking the President out of context. pic.twitter.com/d6fKSUYg85