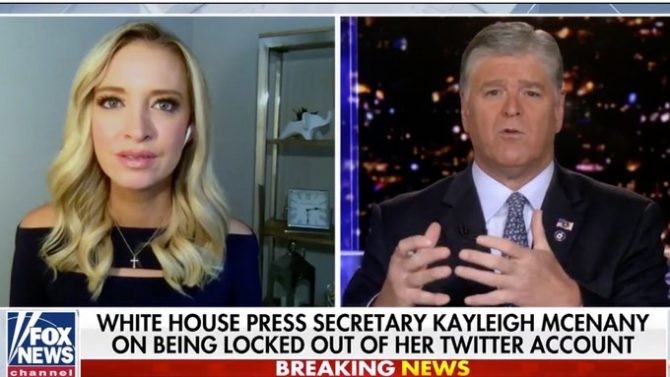 Hey, remember when White House press secretary Kayleigh McEnany said on her very first day on the job that she would never, ever lie to us? Well, obviously that was a big, fat lie. And now, her lying has gotten her temporarily banned from Twitter.

This week, McEnany accused the social media platform of holding a “gun to my head” after she posted a link to a bogus story about Joe Biden‘s son, Hunter.

Speaking to Fox News, McEnany, who recently tested positive for coronavirus, claimed she had been “permanently” banned from her personal account after sharing the wildly misleading tabloid article.

Kayleigh McEnany has been banned from twitter for spreading misinformation. You can make this permanent by voting for Biden.

Except that McEnany wasn’t “permanently” banned. That was another lie.

“[They] essentially have me at gunpoint!” McEnany boasted to Fox News.

OK, let’s not be dramatic, Kayleigh.

As of late yesterday, McEnany’s personal Twitter page appears to be back up and running and she’s wasted no time declaring herself a victim of censorship and accusing Twitter, China, the media, big tech, the deep state, Hollywood elite, and “the swamp” of being against her.

THE MEDIA is against us.

BIG TECH is against us.

THE SWAMP is against us.

THE DEEP STATE is against us.

THE HOLLYWOOD ELITE is against us.

CHINA is against us.

But President Trump has the WORKING MAN AND WOMAN and NOTHING can beat that??

18 days until the election, folks.