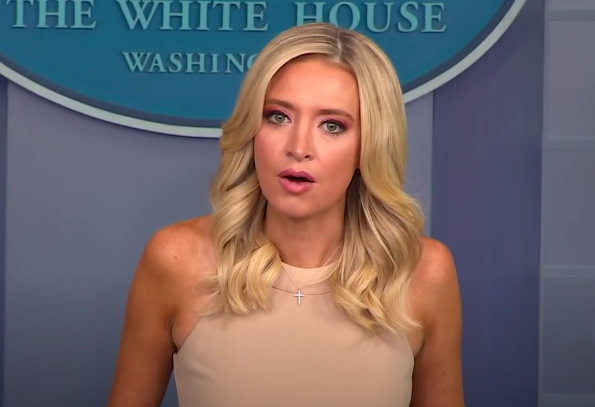 The photo shows all the labeled tabs McEnany uses to access the White House’s propaganda bullet points when speaking to the press, offering a telling glimpse into the Trump administration’s real priorities.

Some of the topics listed on the tabs include:

The rare photo has caused quite an eruption on Twitter…

She should just label the entire file “LIES.”
With a black sharpie.

These are the tabs from @PressSec’s briefing book today. This is a physical manifestation of utter chaos and an inability to lead/focus.

That our government is spending time right now drafting up clever responses to GOYA, OBAMA, & GOLF is ABSURD. pic.twitter.com/dFxblDaGUp

All those tabs yet this coulda covered every one of them… pic.twitter.com/XYCIYTdP3S

The next question should be “can you answer any question without looking for an answer in your prepackaged binder?”

This is sooo absurd. There’s even a tab for “absurd” in WH Press Secretary Kayleigh McEnany binder.
🤣🤣🤣
I’d say you can file everything under that tab. https://t.co/NITTTtVHd8

This is the book you need to keep all the lies straight.

Imagine everyday having to put a binder together to defend @realDonaldTrump‘s lies. This edition has tab attacks against @MaryLTrump & @LarryHogan Ms Trump wrote the tell-all book. Gov Hogan is married to a South Korean, a genre of humans that Trump hates. LGBT, too. @PressSec pic.twitter.com/iuEsNMuTqf

When you need a binder like that and can’t answer any questions without reading directly from prepared statements, you might be working for a scandalous, criminal, authoritarian government or ill equipped to be a @PressSec

During her tenure, McEnany has developed a reputation for flipping open her briefing book after a particularly confrontational question and reading verbatim from pre-written responses, which often included canned attacks on the press or praise from allies.

Related: Lori Lightfoot is all of us when she tells Kayleigh McEnany, “Hey Karen. Watch your mouth.”