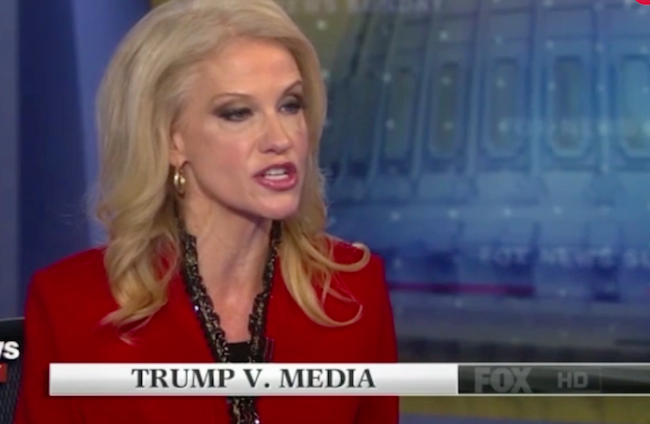 Appearing on Fox News Sunday this weekend, Kellyanne Conway lashed out at the media in general, claiming that commentators should be fired for their negative coverage of Trump.

No surprises there. What did come out of left field, however, was the part where she talked about all the “gaping, seeping wounds.”

As The Independent reports, Conway lamented the fact that “not one silly political analyst and pundit who talked smack all day long about Donald Trump has been let go.”

Then, her rhetoric quickly devolved into something on the impressionistic and Gothic tip, and it had something to do with “gaping, seeping wounds” and the confession that she hasn’t “slept in months:

“I spoke for thirty-five minutes on three network Sunday shows … you know what got picked? The fact that I said ‘alternative facts.’ Not the fact that I ripped a new one to some of those hosts…

Every single day, we turn the other cheek. If you’re part of Team Trump, you walk around with these gaping, seeping wounds every single day, and… and that’s fine. I believe in a full and fair press, I’m here every Sunday morning, I haven’t slept in months.”

Watch the bizarre monologue below: