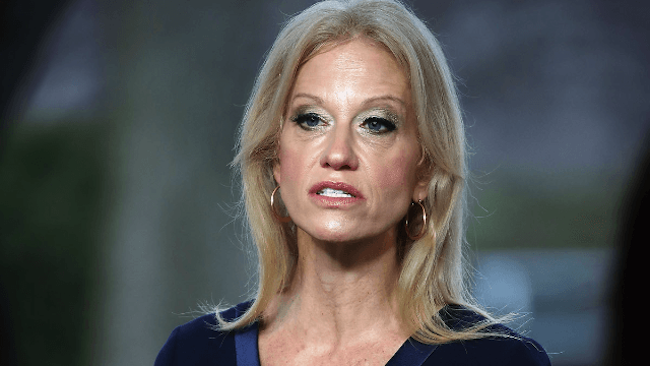 As domestic terrorists breached the U.S. Capitol yesterday in an attempt to stop Congress from certifying Joe Biden as the winner of the 2020 presidential election, Kellyanne Conway took to Twitter to urge them to please “stop, just stop.”

STOP. Just STOP. Peace. Law and Order. Safety for All

Conway followed that up with another tweet sharing an article about Speaker Nancy Pelosi‘s office being ransacked by the MAGA militia she helped build during her years spent working for Donald Trump.

“This is not appropriate, not legal and not funny. Get out,” she wrote.

This is not appropriate, not legal and not funny. Get out. https://t.co/4RfWUNqlF3

There are sooooo many things we’d like to say right now, but perhaps it’s better if we let others do the speaking for us.

First, there’s Conway’s teenage daughter, Claudia, who posted this video to TikTok asking her mother how it feels to have failed at, frankly, everything.

you helped do this. you will be held accountable but thanks for trying when it does not matter anymore. 🤨 pic.twitter.com/sc2QnbMh5s

These are just alternative protests

You made him too.
You own this too.
Too late.
Go away.

How do you type with such bloody hands?

She’s apparently never read Frankenstein. This is their monster – and those monsters have a tendency of holding their creators accountable one way or another.

This is all as much your baby as young Claudia. You made this.

Aren’t you enjoying this! pic.twitter.com/U8utYTwBpo

You gathered the kindling, soaked it in gas, threw matches at it, and now you’re complaining about the fire.

Our personal favorite is this response from Mary Trump…