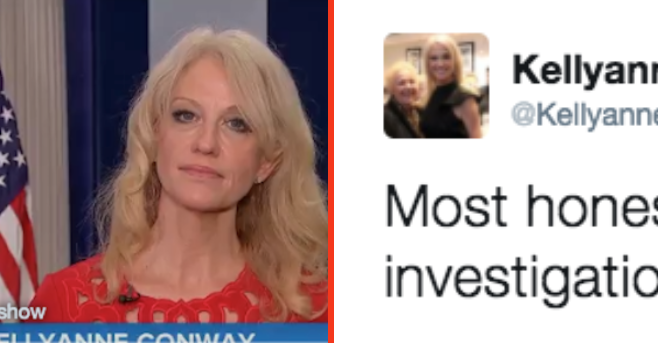 Remember when “Hillary’s emails” were the nation’s biggest buzz words?

Kellyane Conway surely does — it was practically written in her job description to bring them up at any and every opportunity ahead of the election.

And that includes one Tweet that sure looks odd some five months after she fired it off.

Shortly before the election when James Comey, the FBI director, controversially announced a new batch of Hill’s emails were being investigated, Conway Tweeted:

Most honest people I know are not under FBI investigation, let alone two. https://t.co/UcSmSA5aTj

Well what we’ve learned this week is that the FBI has been investigating the Trump campaign’s ties to Russia since July of last year, and is continuing to do so. And now that those ties seem to be growing ever stronger, including today’s allegations that a Trump aide laundered money from a pro-Moscow party, those emails sure are feeling like a whole lot of nothing.

Enter this into: "Tweets that haven't aged well" https://t.co/WW4fQAL2au