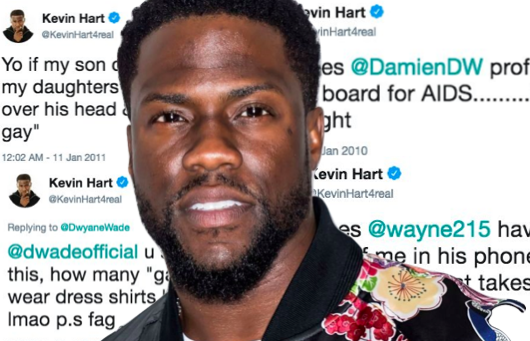 Well, that was fast.

On Wednesday Afternoon, comedian Kevin Hart was announced as the host of the upcoming 91st annual Academy Awards. Just over 24 hours later, he’s stepped down from the gig.

Between those bookends, Hart’s homophobic past resurfaced in a way that was impossible for Oscars viewers, many of whom are LGBTQ, to simply brush off.

Here’s a small sample of the content he was attempting to scrub off his image:

“I have made the choice to step down from hosting this year’s Oscar’s. This is because I do not want to be a distraction on a night that should be celebrated by so many amazing talented artists. I sincerely apologize to the LGBTQ community for my insensitive words from my past. I’m sorry that I hurt people… I am evolving and want to continue to do so. My goal is to bring people together not tear us apart. Much love & appreciation to the Academy. I hope we can meet again.”

That’s nice and all, but how about addressing some of the specifics? We can understand he’d like this whole situation to disappear as quickly as possible, but if there was ever a right moment to get candid about his self-described evolution, now might be it.

The Academy again seeks to cast a host for its biggest night of the year — a job nobody in Hollywood seemed to want at all.

The Academy has made no further comment on Hart or its current casting predicament.

An hour before Hart issued his Twitter apology and stepped town, he told a different story on Instagram, explaining, in so many words, how he’s the real victim here. He describes being phoned by the Acadamy, who demanded he apologize for the tweets to hold onto the hosting gig. His initial reaction was to dig in his heels — he had nothing to apologize for.

It would appear he had a change of heart.