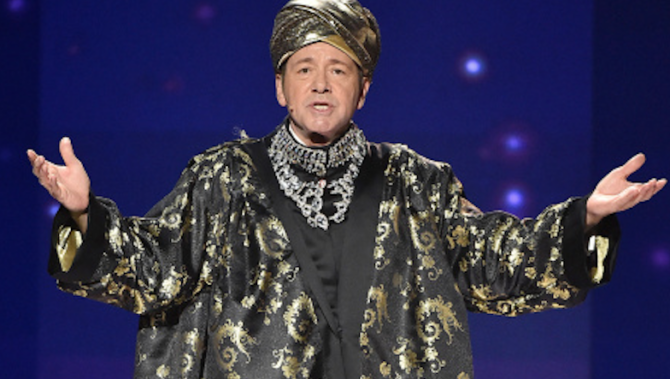 Kevin Spacey hit his mark, adopted a theatrical wingspan fit for the occasion, and enunciated so as there was no confusion. “I’m coming out,” the celebrated actor crooned to the audience of Sunday night’s Tony Awards, where he was hosing for the first time.

“No, wait — no,” he then stammered, hitting the punchline to a weak-at-best joke about fudging the lyrics to his opening number.

It was the second reference to coming out Spacey made in his musical revue, the first coming during a particularly awkward exchange with Whoopi Goldberg.

“Whoopi, how long have you been in that closet?” Spacey asked. “Well Kevin, it depends on who you ask,” Goldberg quipped, earning a roar from the crowd.

Twitter took note of the oddity of it all:

Seriously, Kevin Spacey, stop with the smarmy "coming out" quips … unless you're really doing it. #TonyAwards2017

I don't like jokes about Kevin Spacey not coming out. #distaste #TonyAwards

This is just Kevin Spacey's big long coming out announcement isn't it? #TonyAwards2017

"Kevin Spacey makes a coming out joke" is a finish-your-drink on your Tonys drinking game.

Kevin Fallon put it pretty well over at The Daily Beast, writing, “To be clear, we’re not ridiculous enough to really find offense in Spacey’s jokes. Our general reaction can be summed up in our loud groan and dramatic eyeroll after it happened. Kevin Spacey joking about his sexuality at the Tony Awards in 2017 is just… annoying.”

The entire act — which skewered 2017 Tony nominees like Dear Evan Hansen, Groundhog Day, Come From Away, and Natasha, Pierre, and the Comet of 1812 — seemed a bit off the mark. Even guest stars Steven Colbert and veteran host Billy Crystal couldn’t do much to help the energy on stage. But hey, maybe you’re obsessed with musicals and will love it.

LA Times reporter Steven Zeitchik, who attended the show, said, “These jokes are way inside but they are slaying in the room.”

Judge for yourself below: