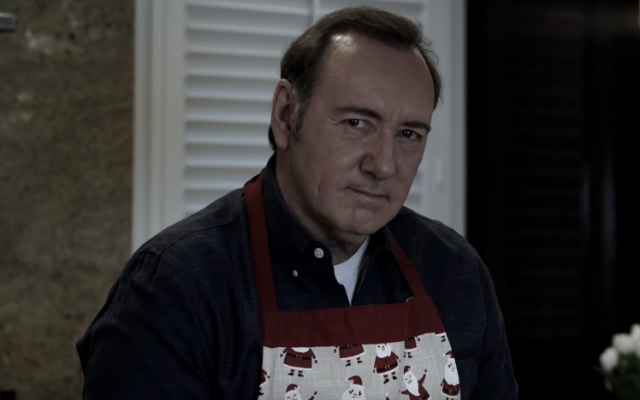 Over the holiday weekend, Spacey released a creepy AF video kinda sorta defending himself against the slew of sexual misconduct accusations lodged against him over the past year.

The chilling three-minute video titled Let Me Be Frank, a nod to his character Frank Underwood from Netflix‘s House of Cards, depicts the 59-year-old actor standing in a kitchen wearing a Santa Claus apron.

The video was uploaded to Spacey’s YouTube channel on Christmas Eve and has already garnered nearly 6.5 million views.

You wouldn’t believe the worst without evidence would you? You wouldn’t rush to judgments without facts, would you? Would you? Did you? No, not you. You’re smarter than that. Anyway, all this presumption made for such an unsatisfying ending, and to think it could have been such a memorable sendoff.

Things get even creepier, when Spacey later says: “Despite all the poppycock, the animosity, the headlines, the impeachment without a trial, despite even my own death, I feel surprisingly good.”

“My confidence grows each day that soon enough, you will know the full truth. Wait a minute, now that I think of it, you never actually saw me die, did you? Conclusions can be so deceiving.”

The creepy AF video ends with a burst of cheesy cliffhanger music and was released just days after Spacey was slapped with a felony charge of sexual assault in Massachusetts.

Heather Unruh, a former Boston TV anchor, has accused Spacey of sexually assaulting her son in Nantucket in 2016, saying the actor supplied her 18-year-old with alcohol before forcing himself upon the minor.

Cape and Islands District Attorney Michael O’Keefe said Monday that Spacey, 59, was scheduled to be arraigned on a charge of indecent assault and battery at Nantucket District Court on Jan. 7, after a Dec. 20 public show-cause hearing where clerk magistrate Ryan Kearney issued a criminal complaint. O’Keefe, who spoke by phone and read from a statement, declined to comment further.

Spacey also remains under investigation on suspicion of sexual assault in Los Angeles for another alleged incident that occurred in 2016.