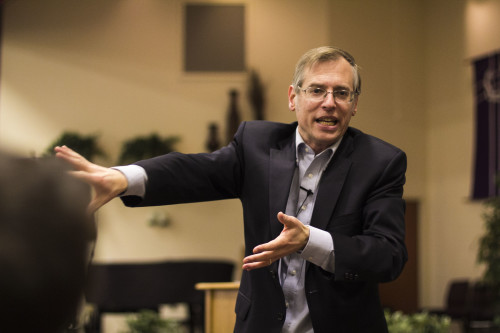 Ugh. Kevin Swanson, the “Christian” pastor who once said he’d rather smear cow manure all over his body rather than attend a gay wedding, claims Hurricane Harvey was a message from God sent to cities across the land that have embraced “sexual perversion.”

Jesus sends the message home, unless Americans repent, unless Houston repents, unless New Orleans repents, they will all likewise perish! That is the message that the Lord Jesus Christ is sending home right now to America!

He continued by saying that anyone who doesn’t believe a major weather event is the work of a wrathful higher power is clearly not paying attention. Houston, Swasnon said, was targeted by God for “persecuting pastors and churches.”  Additionally, he warned, the city recently had “a very, very aggressively pro-homosexual mayor.”

I think that the entire state of Texas and the entire United States of America needs to take note of this and realize that there is a God in heaven. He brings His judgments and He calls nations to repentance, as He is doing right now!

Swanson went on to say that it’s no coincidence the remnants of Hurricane Harvey are headed toward New Orleans just as the city prepares for its annual Southern Decadence festival. This, Swanson claims, is God’s way of giving the city a “head’s up” before it hosts “the largest sexual perversion event in the country.”

“Is anybody paying attention in New Orleans?” he asked. “Unless you repent, you will likewise perish! And repairing your houses in Houston after a hurricane is useless if you’re just going to go to hell!”

Related: Did This Antigay Pastor Just Admit To Having A Poop Fetish?