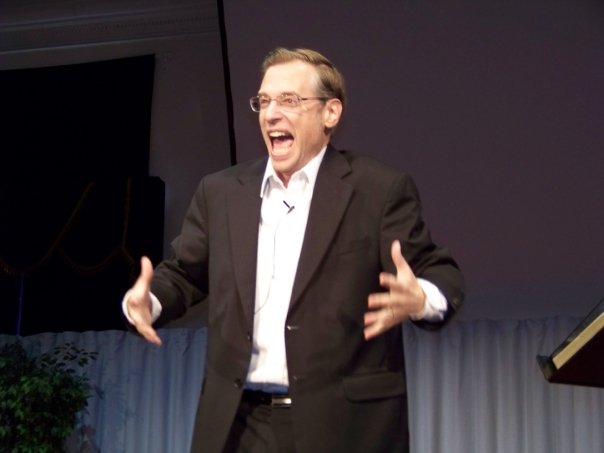 Perhaps most notoriously, in 2015 he said he’d “sit in cow manure and I’d spread it all over my body” if his son were to grow up to marry a man.

Related: Did This Antigay Pastor Just Admit To Having A Poop Fetish?

Not only does he think all gays should be executed, but all Girl Scout leaders, too — since they support LGBTQ rights and the rights of women.

He’s also predicted that some freewheelin’ promiscuous homosexual is going to destroy the world one day.

Last month, Swanson declared on his radio show that any pastor who has a gay child should resign immediately, for it’s the proper thing to do.

As Right Wing Watch reports, he was referring to an old article written by a former pastor who said if his kids were gay, he’d love them all the same and “pray for God to protect them from the ignorance and hatred and violence that the world will throw at them, simply because of who they are.”

A gay child, he thinks, means “there may be something very, very wrong with the pastor himself.”

“A man who thinks there is a possibility his kids could come out gay [would not] then not turn to himself and see there to be something of a problem with himself.”

“As a pastor, if your children turn out to be sinners,” he says, “if it turns out they abandoned the faith while they are in the household, accused of riot and unruly debauchery, et cetera, within the household, you need to resign as a pastor.”

That’s what we meant when we said “categorically nuts.”