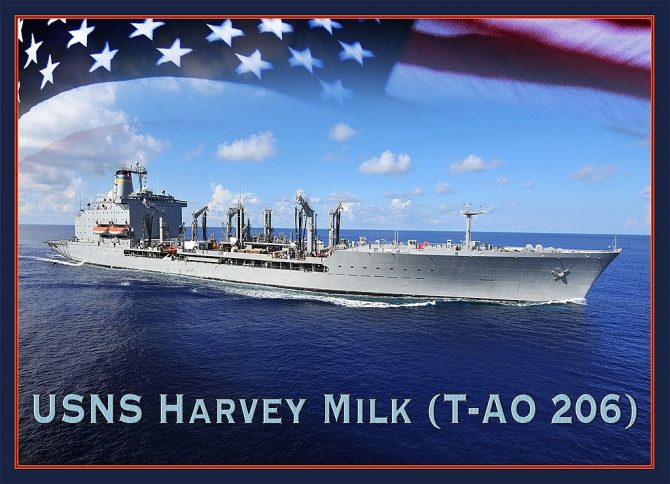 Nearly 65 years after being ousted from the U.S. Navy for being gay, and nearly eight years after the San Francisco Board of Supervisors first lobbied to have a ship named after him, construction on the the USNS Harvey Milk has finally begun.

Milk joined the Navy during the Korean War and served  as a diving officer aboard the submarine rescue ship USS Kittiwake. Later, he was transferred to Naval Station, San Diego, where he continued serving as a diving instructor.

In 1955, he was discharged from the Navy after he was caught in a park that was a popular hangout for gay men. Milk’s superiors became suspicious about his sexual orientation and demanded he resign.

Of course, we all know what happened after he eft the Navy.

In 1972, he moved to San Francisco and opened a camera shop in the Castro. He soon began a local activist, before ultimately becoming one of the first openly LGBTQ elected officials in America and a vocal advocate for gay rights.

Milk was assassinated by former city supervisor Dan White in 1978.

The San Francisco Board of Supervisors first lobbied the Secretary of the Navy to name a ship after him in 2012. In 2016, the Navy announced Milk’s name would, indeed, appear on a ship.

“When Harvey Milk served in the military, he couldn’t tell anyone who he truly was,” Scott Wiener, then a San Francisco supervisor, said in 2016 after the Navy announced the ship’s name. “Now our country is telling the men and women who serve, and the entire world, that we honor and support people for who they are.”

On Friday, the Navy began constructing the USNS Harvey Milk, a fleet oiler that will provide fuel to ships and aircraft. The vessel will be the second of the John Lewis class of underway replenishment oilers, operated by the Military Sealift Command to support ships of the U.S. Navy.

Subscribe to Queerty for a daily dose of #life #harveymilk #u.s.navy stories and more