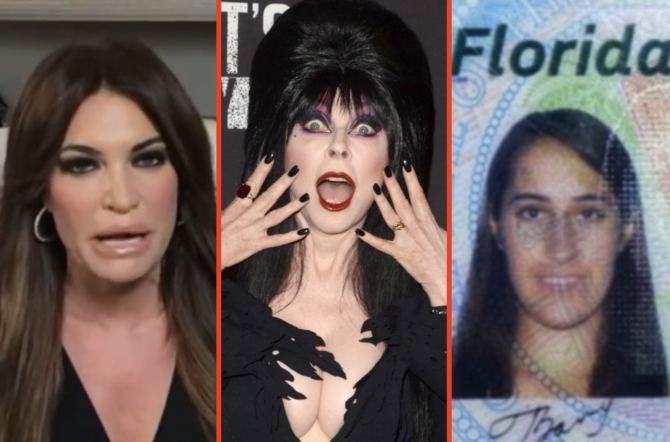 Why are Kimberly Guilfoyle, Elvira, and some alleged Russian spy all trending together on Twitter? Read on (and bear with us!)…

Guilfoyle has been trending since going on Newsmax and bitching about President Biden’s student loan forgiveness program.

“Enough of this nonsense!” Guilfoyle ranted on Rob Schmitt Tonight on Sunday evening. “Paying off loans for people that want some bizarre basket weaving degree and they want all of us, people watching all across this country, to subsidize their laziness.”

Ironically, Guilfoyle, who graduated from the University of California, Davis, doesn’t have a job… aside from occasionally giving paid speeches (like the time she pocketed $60,000 for a three-minute diatribe at Donald Trump‘s pre-insurrection rally on January 6, 2021) and being Don Jr.’s fiance, which, to be fair, is probably a fair amount of work.

"Enough of this nonsense. Paying off loans for people that want some bizarre basket weaving degree and they want all of us, people watching all across this country to subsidize their laziness"pic.twitter.com/N86qhlXgdU

Now, any time someone from Trump’s klan says something stupid and inflammatory, we always like to ask ourselves: What are they trying to distract us from?

In Guilfoyle’s case, her assault on lazy college grads into basket weaving comes at the exact same time a photo of her and alleged Russian spy Inna Yashchyshyn began circulating on social media.

33-year-old Yashchyshyn reportedly claimed she was a Monaco millionairess named Anna de Rothschild when she dined at Mar-a-Lago and posed for photos with the Trumps in May 2021.

She told guests and members of Trump’s private club that she was an heiress of the wealthy European banking family with ties to elite real estate developers, according to a report by the Pittsburgh Post-Gazette and the Organized Crime and Corruption Reporting Project (OCCRP).

The woman later posed for photos with the former president and a close ally of his, Republican Sen. Lindsey Graham, on a golf course near Mar-a-Lago in addition to meeting with Donald Trump Jr.‘s fiancée, Kimberly Guilfoyle, and other Trump associates.

In reality, she’s the daughter of a Ukrainian truck driver. FBI agents believe she also posed as the president of a children’s charity called United Hearts of Mercy, which was actually a front used to funnel money to Russian mobsters.

Investigators reportedly obtained fake U.S. and Canadian passports that show Yashchyshyn’s photo and the name she used to infiltrate Mar-a-Lago and snap photos with Guilfoyle and others.

"Anna De Rothschild" isn't just an imposter who bluffed her way into Mar-a-Lago, golfing with Trump, dining with Kimberly Guilfoyle, and swanning around a beach house bulging with Classified documents.

She fit right in. pic.twitter.com/9HEJo1WSjx

Now, like we said, the timing of Guilfoyle’s Newsmax meltdown and the photo of her dining with Yashchyshyn at Mar-a-Lago could be a total coincidence. Regardless, the whole thing is alarming and absurd.

Related: Christian Walker got out-trolled by Elvira on Twitter and the shade is just too good

Adding yet another layer of absurdity to the situation is the fact that queer horror icon Elvira (a.k.a. Cassandra Peterson) somehow got unfairly roped into the conversation late yesterday when people started pointing out the similarities between Guilfoyle’s uncanny resemblance to the Mistress of the Dark.

Am I the only one who thinks Guilfoyle looks like a cheap ripoff of Elvira, Mistress of the Night?

Elvira is trending because people think Kimberly Guilfoyle looks like her.. ? pic.twitter.com/IxkKlckrLU

elvira mistress of the dark does not look like kimberly guilfoyle. do not insult elvira like that. keep my wife’s name out ur mouth.

Guilfoyle has not commented on the photo of herself and Yashchyshyn.