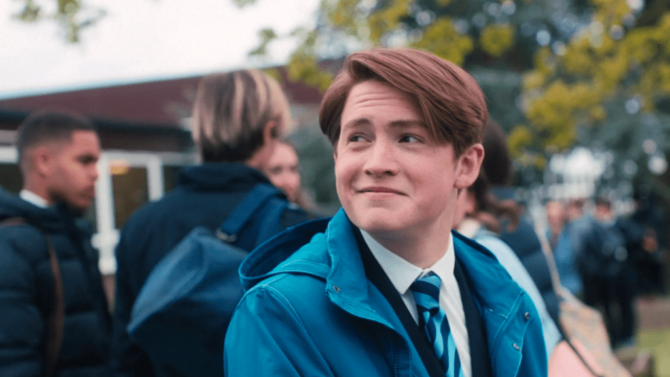 Over the past month, Heartstopper has become an instant classic of young queer crush content, and its cast is blowing up just as fast.

Leads Kit Connor and Joe Locke are up for National Television Awards, Yasmin Finney has been announced for an upcoming installment of Doctor Who, and creator Alice Oseman has signed on with the cast for two more seasons with Netflix.

For Connor, however, not all of the newfound attention has been so welcome. A couple weeks back, he took to Twitter to address the rumblings of speculation over his personal sexuality since playing bisexual Nick Nelson in Heartstopper.

twitter is so funny man. apparently some people on here know my sexuality better than I do…

Connor has never made any public statement defining his sexuality, and in a new interview for the Reign with Josh Smith podcast, he made it clear that he doesn’t plan to any time soon.

“For me, I just feel like I’m perfectly confident and comfortable with my sexuality,” he stated. “I don’t feel like I need to label myself, especially not publicly.”

Connor directly referenced the aforementioned tweet, saying, “That tweet was sort of slightly calling them out. I honestly found it a little bit funny how they just make assumptions.”

“It’s 2022. It feels a bit strange to make assumptions about a person’s sexuality just based on hearing their voice or seeing their appearance. I feel like that’s a very interesting, slightly problematic sort of assumption to make.”

Further, the 18-year-old pointed out that the cast members being speculated about are of an age where they may not even fully know themselves yet.

“We’re still all so young, and to start sort of speculating about our sexualities and maybe pressuring us to come out when maybe we’re not ready?”

One thing is for sure: Kit Connor has plenty of life ahead of him, and however he ends up living it is his business.