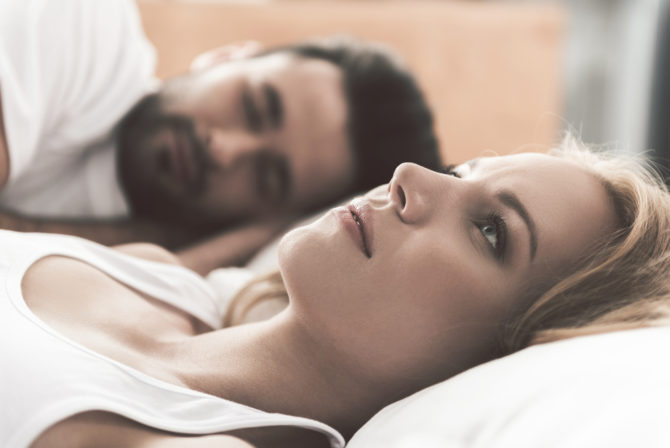 A straight-identifying woman says she knowingly married a gay man and now she’s freaking out that he might leave her for another guy so she’s writing to advice columnist Danny M. Lavery for help.

“I met my husband 13 years ago, and we’ve been together ever since,” she explains. “We fell deeply, madly in love with each other and have been married for nine wonderful years now.”

“He’s also always been honest about being gay and has never hidden it from me. Only one of our mutual friends knows this about my husband. Our son also knows, since we thought it would be best to remain open with him about it, so he never ‘found out’ by surprise or from our mutual friend.”

Everyone seems to be OK with the arrangement, so that’s cool. But the woman says lately she’s started to feel insecure about things.

She explains that her husband was previously married to a woman but that the marriage fell apart when he met another man and fell in love.

“I’ve asked my husband about it, and he confirms that he’s gay, not bisexual. He left his first wife because of a lot of problems (and her infidelity), then he was in a few different relationships with other men, before he met his ex-boyfriend. They were still living together when we met. I’m confused by it all, and it has, at times, caused problems in our marriage.”

“I have doubts that he might leave me someday for a gay relationship like he did his ex-wife,” she writes. “We’ve both been faithful to each other, and he loves me, and I love him. But is that good enough for him? Would you consider him bisexual or gay?”

In his response, Lavery avoids the obvious question and instead suggests the woman try not to obsess over whether her husband is gay or bisexual, especially since he’s already told her he identifies as gay.

He goes on to suggest that maybe she speak to a therapist, join her local PFLAG chapter, or connect with other people in mixed-orientation marriages to build a support network.

He continues, “His gayness isn’t something you can neutralize by being a sufficiently-good or extra-loving wife. It’s something you two should discuss openly and often between yourselves, and at least some of the time with an outside party who can help you gather your thoughts, clarify your goals and desires, and figure out how best to care for each other.”