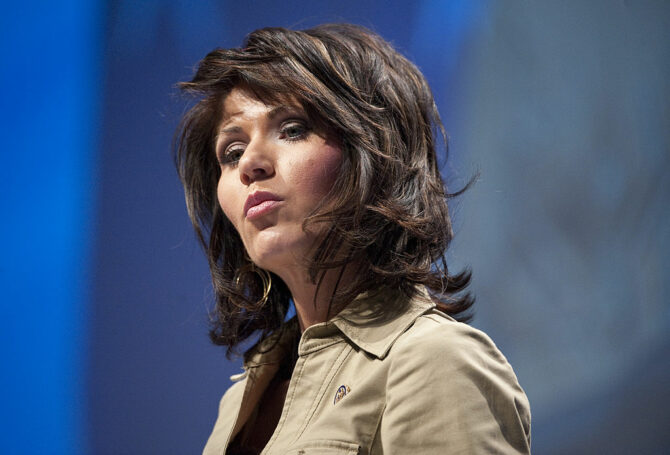 One month after signing an anti-LGBTQ law that bans trans kids from playing on school sports teams that match their gender identity, South Dakota Governor Kristi Noem has signed a racist law that bans state universities from using “divisive” educational materials that might cause “discomfort” among students.

Related: Kristi Noem says she has no idea why LGBTQ people might be depressed

In a statement issued yesterday, Noem said, “No student or teacher should have to endorse Critical Race Theory in order to attend, graduate from, or teach at our public universities. College should remain a place where freedom of thought and expression are encouraged, not stifled by political agendas.”

The new law lists seven “divisive concepts” that are now outlawed from being included in mandatory trainings for college students or faculty members at public universities in South Dakota:

Noem joins two other Republican governors who have signed similar legislation in their states: Glenn Youngkin of Virginia and Ron DeSantis of Florida, who is currently mulling over whether to sign that homophobic “Don’t Say Gay” bill into law as well. Coincidentally, all three are rumored to be considering 2024 presidential runs.

Related: Ron DeSantis just reminded everyone he’s a pile of homophobic garbage, in case anyone forgot

But the GOP’s assault on education and teaching tolerance and acceptance in public schools and universities doesn’t stop there. All across the country, Republican lawmakers have been working to ban books that deal with LGBTQ issues from libraries.

Last week in Texas, 26 Republicans signed a statement calling the graphic novel “Gender Queer: A Memoir” by Maia Kobabe “pornography” and demanding school districts do a better job filtering out “explicit materials for children.” And last month in Tennessee, the state’s Republican supermajority introduced legislation that would criminally charge librarians if they provide access to “pornography and inappropriate content in books” to kids.

Related: The 10 best banned queer books worth adding to your library

Continuing with her crusade of bigotry, the other day, Noem tweeted about that transphobic bill she signed into law last month, writing: “In South Dakota, we believe in protecting women’s sports. That’s why as Governor, I signed the strongest bill in the nation to defend fairness in women’s sports. If our national leaders truly cared about equality, men would not be competing with women in women’s sports.”

In South Dakota, we believe in protecting women’s sports.

That’s why as Governor, I signed the strongest bill in the nation
to defend fairness in women’s sports.

If our national leaders truly cared about equality, men would not be competing with women in women’s sports.

Its not about sports,its about the rights of transgender people,
We all know it.

Truly the dilemma of our times! I’m glad you spent your time in power solving it! /s

There has only been one transgender girl compete in high school sports in SD the past 10 years. One. And your HS Athletics Association says she didn’t have an unfair advantage.

Protecting the sport? Why don’t you get onboard with protecting women?