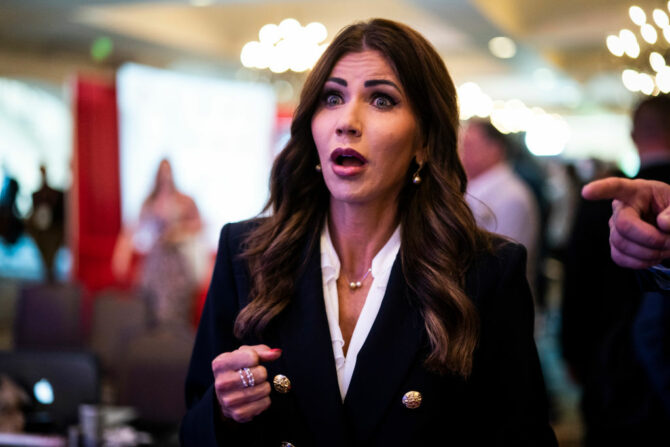 Kristi Noem has some explaining to do.

Greg Travis, who is currently running for a seat in the Texas House of Representatives, posted a photo of himself and his wife beside Noem and Lewandowski to Twitter, along with the caption: “Julie and I with Governor Kristi Noem and Corey Lewandowski. Hanging out with Keith and Alice Mosing and Chuck and Gena Norris at the Kickstart Kids Annual Gala. Great program worthy of suppprt [sic].”

Julie and I with Governor Kristi Noem and Corey Lewandowski.

Hanging out with Keith and Alice Mosing and Chuck and Gena Norris at the Kickstart Kids Annual Gala.

So why is this such a big deal?

Well, rumors that Noem and Lewandowski were having an affair swirled last September when a report by the right-wing blog American Greatness alleged the pair had been seeing each other for some time and that the relationship wasn’t exactly a secret among GOP insiders.

“There are members of Congress close to Mar-a-Lago who have called the affair ‘an open secret’ and worried about Noem’s viability as a national candidate and within the movement,” an unnamed source claimed.

At the time, Lewandowski was a top adviser to Noem and had traveled around the country with her, introducing her to major GOP donors and power players.

In response, Noem issued a strongly-worded tweet, saying, “These rumors are total garbage and a disgusting lie. These old, tired attacks on conservative women are based on a falsehood that we can’t achieve anything without a man’s help.”

The “family values” Republican went on to say that she loves her husband, Bryon, very much and that she wasn’t going to let such nonsense keep her from doing her job of running her state as deeply into the ground as possible by ignoring science, attacking trans kids, and issuing draconian executive orders before her terms ends in 2023.

At the same time the affair rumors began circulating, another story involving Lewandowski was published by Politico alleging that he made unwanted sexual advances toward a female Trump donor at a Las Vegas charity event, where Noem was also in attendance, in September 2021.

In response, his attorney said, “Accusations and rumors appear to be morphing by the minute and we will not dignify them with a further response.”

After that, Noem distanced herself from Lewandowski, dropping him as an adviser and having her spokesperson issue a statement clarifying that he was “always a volunteer, never paid a dime (campaign or official).”

But apparently, he’s back in her good graces since the two appear to have spent time together last weekend at the Hilton Americas-Houston, where the Kickstart Kids Annual Gala was held.

Neither Noem nor Lewandowski posted anything to their social media pages about being in Houston on Saturday night, though the governor did wish everyone “blessings of fellowship and family” on Palm Sunday at 7 AM the next day.

Well, well, well. I, for one, feel sorry for Bryon Noem.

Kristi and Corey an item?….

So glad you brought the 2 lovers together again.

Greg, did you ask @govkristinoem if you could post this picture? Because according to her office she and Corey cut ties six months ago and for very pertinent reasons…

Hmm…more “consulting “…I wonder where Krusty’s husband is?

Shouldn’t @govkristinoem be doing these type of events in the state she governs? O wait she’s probably on vaca again with her boyfriend Corey. In Texas. On our dime I’m sure.

Good to see her and Corey back together

Taxpayers $ money going to support an affair. Showing it’s O.K. to have an affair is a great way to Kickstart Kids.