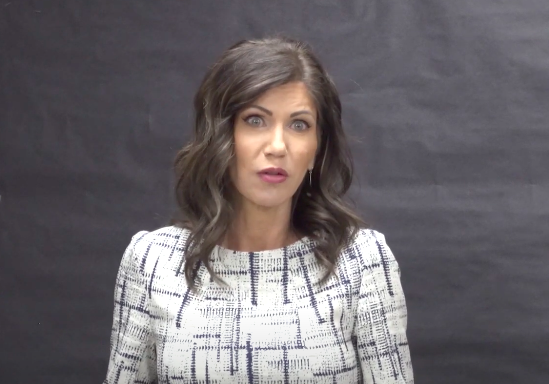 It has been a truly craptastic week for Kristi Noem.

The LGBTQ-hating, science-denying Governor of South Dakota has officially severed ties with her alleged boyfriend/advisor Corey Lewandowski. The move comes one day after she denied a report published by a conservative website that claimed the two were having an extramarital affair.

On Wednesday, the “family values” Republican fired off an angry tweet, calling rumors of the alleged affair “total garbage” and a “disgusting lie” then proclaimed her love for her husband, Bryon, and her fear of God.

“These rumors are total garbage and a disgusting lie,” Noem said. “These old, tired attacks on conservative women are based on a falsehood that we can’t achieve anything without a man’s help.”

But Noem dismissing Lewandowski as nothing more than a casual volunteer adviser is disingenuous at best and a downright lie at worst.

The guy has been a top advisor to her for months, traveling with her all across the country, and connecting her with major Republican Party donors and power players as she positions herself fo a potential run for president in 2024.

In fact, just last weekend the two attended a charity event in Las Vegas, where Lewandowski was accused of making unwanted sexual advances toward a female Trump donor.

In a statement, his attorney, David Chesnoff, said, “Accusations and rumors appear to be morphing by the minute and we will not dignify them with a further response.”

In addition to allegedly hooking up with Lewandowski, Noem was also accused this week of abusing her power by using her position as governor to get her daughter Kassidy’s application to be a certified real estate appraiser approved after it was initially denied, then forcing the woman who denied it to retire, a charge she is also denying.

This is an interesting way to announce they broke up.

Do you think Kristi Noem dumped Corey Lewandowski with a text, or did she just ghost him?

I just wanted to remind folks that Kristi Noem is corrupt and needs to resign.

Why do people brag about being "God fearing"? (Yeah looking at you, Kristi Noem.)

Seems to me if you fear God you either worship an angry and vengeful God or you have a very guilty conscience.

Soon both Corey Lewandowski *and* Kristi Noem will be out of a job.

Corey Lewandowski proving that one woman's trash is another woman's … Trash. pic.twitter.com/wf9afQKYue

So Corey came and went, huh 😏

How does Corey Lewandowski keep getting mistresses? I can't be the only one who finds him gross. I guess R women have really low standards

Tune in tomorrow for another episode of Kristi’s South Dakota Shitshow.