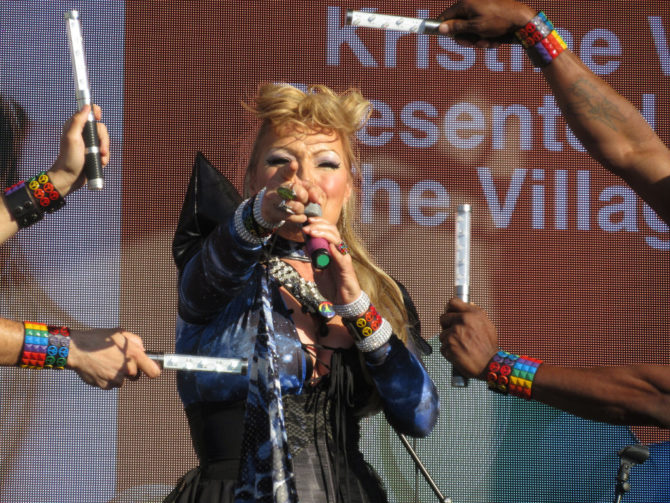 Kristine sat down with the fabulous Pam Ann for Queerty to talk about the PAWS benefit show, pride, performing and jamming with u2.

Pam Ann: Hello, lovely. I am so excited to interview you.
Kristine W: Pam, I love you, but you know that. This is so fun to have you interview me. You’re a comedic genius. Just saying sister.
Let me take off my stewardess cap and put on my reporter hat. Ah, much better! Now, Kristine, dear, we’re here to talk about your PAWS/LA benefit concert, Glitterama: Divas4PAWS, at the the Avalon Hollywood, June 8, but first I have to tell people what you revealed to me that last time we spoke. You used to compete in the javelin throw!
I broke the national record for my age group in high school. I could have had a full ride scholarship to any university I wanted.  Instead, I chose to pursue music.
Look at you now. You’ve recorded with Elton John and Patti LaBelle, jammed with U2, even performed for Michael Jackson. So, like me, being mistaken for a drag queen has been a good thing for your career, has it not?
(Laughing) It was actually very alarming to my record label, RCA, who had Britney Spears and *NSYNC at the time, that people thought I was a drag queen! I loved it and laughed about it but they would actually have meetings in NYC about how they could make me look more like a real woman.
Did you see RuPaul’s tweet? You’re on Ru’s Cardio Playlist alongside Donna Summer, Mariah Carey and Nicki Minaj.
I love Ru.
I know that Donna Summer was a huge inspiration growing up. What other music artists did you listen to?
I loved Diana Ross. I also loved jazz greats like Al Jarreau. I learned tons about jazz and improvisation listening to his live shows. His wild ability to scat still lives deep in my heart.
Your mom was a big influence, too.
Oh yes, mom was huge. She performed in small supper clubs, singing standards and playing her twelve string guitar. She was a working musician six nights a week and was really into wigs, makeup and costumes, big time. Come to think of it, she was my original drag icon. Ostrich feathers still remind me of the bottom of the mini dresses Mom wore. To this day, she still sleeps with her fake eyelashes on.
What’s the craziest thing you’ve seen another celebrity do when they didn’t think anyone was looking?
I remember one time I was getting ready to perform at the MAC Cosmetics Fashion Cares event and concert. Patti LaBelle was about to take the stage for “Lady Marmalade” so we ran into the audience to watch and just as we got in the front, Patti kicked off her shoe. It went flying into the crowd and hit the guy next to me right in the head, really hard. He froze for a hot minute and I thought, oh shit, he’s going down! But instead, he reached to the floor, picked up Patti’s shoe and danced with it. He had a huge red mark on his forehead but he got a free shoe from a legend. 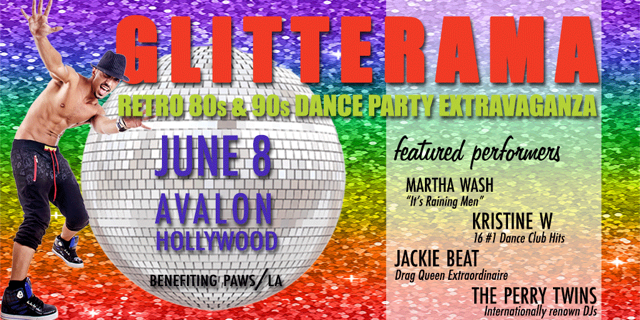 Let’s talk Glitterama. How did you become involved with animal welfare?
I have been a huge animal lover my whole life. It started out with my dad’s horse, Gin Gin. We had ducks and chickens in the back yard, as well as guinea pigs, dogs, cats. As animal lovers, we have to speak out and protect those who can’t speak for themselves. Our animals bring so much joy to our lives. They are part of our families.
PAWS/LA was founded in the 1980’s to help gay men impacted by HIV/AIDS. Have any of your friends or colleagues been affected by HIV/AIDS?
I have lost so many dear friends to HIV/AIDS, I couldn’t even tell you how many. I also have many friends living with HIV/AIDS, and I have made a lifelong pledge to do all that I can while I’m here to help them.
I love you, darling. When am I coming over to your ranch for some horseback riding and man-roping?
You definitely need to come out! You know I’m single again after being in a loooooong relationship.
Can you imagine two single gals like us roaming free in Vegas?
I’m gonna get us a room to play and we are going trolling for guys. “Brokeback Bitches: The Sequel.”
Pam Ann’s new comedy show, “Touch Trolley, Run To Galley 20th Anniversary Show,” takes place Saturday, July 8 @ 7pm at Gramercy Theatre, 127 East 23rd St, NYC. Tickets are available online at Ticketmaster. For more information, visit PamAnn.com.
For more about PAWS/LA, Glitterama and its performers, see kristinew, marthawash, missjackiebeat, theperrytwins, & pawsla/glitterama
Photo of Kristine W by ryan island
Special Queerty discount ticket offer: http://bit.ly/2r996PM
DJ: The Perry Twins 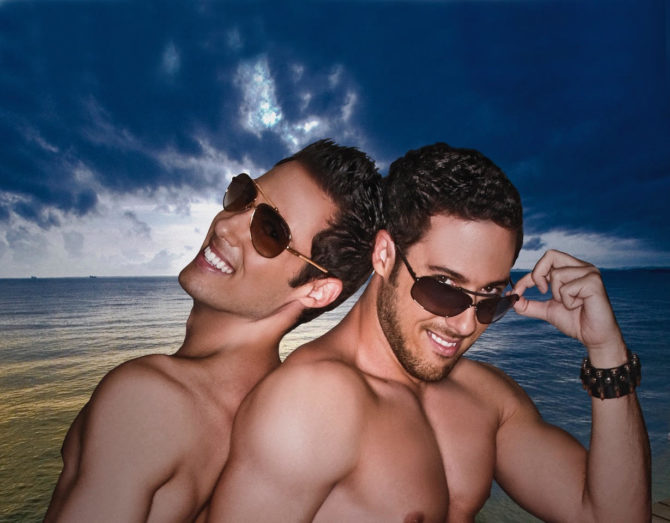