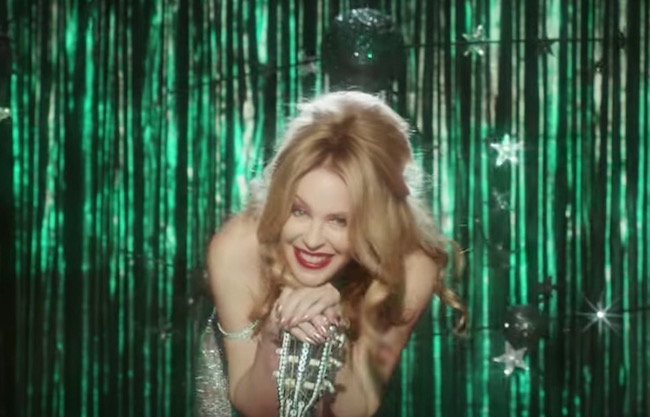 Then today is not your day.

While Kylie Minogue’s new video isn’t exactly The Seventh Seal, it nonetheless stars the Grim Reaper. In fact, it stars a whole dance troupe of romping Grim Reapers, who gamely cast aside their scythes to gleefully dance with Kylie along to her new single “Dancing,” a country-tinged affair that’s all about going out in a blaze of glory.

Related: Because Of COURSE Kylie Minogue Sings The ‘Absolutely Fabulous’ Theme In The Film. Listen Here.

Directed by Sophie Muller and shot at London’s Bush Hall, the video is not a remotely dark affair, and seeks to affirm that death isn’t a particularly dark affair, either.

“Life’s all just moments which all join up,” Kylie says. “Some of them are great, and some of them are less than sparkling – but ultimately I wanted this video to reflect the celebratory nature of the song.”

“I always thought I could learn routines quickly but this was different. However, by the time I had to dance with the Grim Reaper at the end I had mastered it. And if that’s not a funny allegory for life I don’t know what is!”