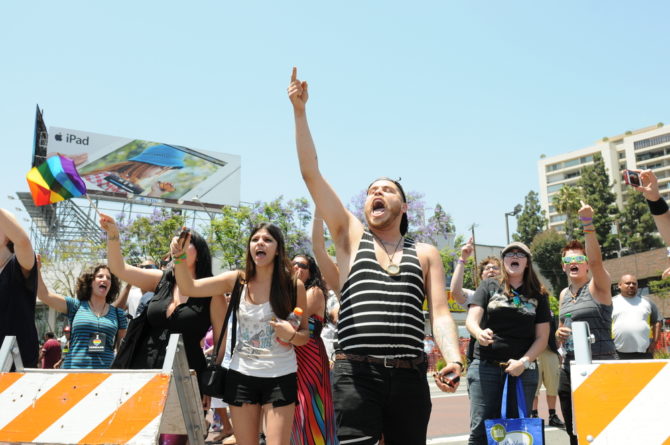 Los Angeles Pride will take on a decidedly more political atmosphere this year, and that has some big-name advertisers opting to sit 2017 out.

In March, local LGBTQ activists succeeded in making official changes to this year’s L.A. Pride lineup. Instead of a celebratory parade — the norm at major Pride festivals — there will be a march against the Trump administration’s threats to LGBTQ rights, to immigrants, to people of color, to the environment — you name it.

That tension — plus the absence of gogo boys and general gaiety — is enough for advertisers to flee, reports FourTwoNine.

“Community members are behind this, but the corporate community is somewhat dubious and nervous about it,” march organizer Brian Pendleton said. “I find it amazing that we’ve been able to get corporations on board with the celebratory frivolity of a parade, but when it comes to standing up for human rights, it’s making them a little bit nauseous.”

The flip side of the argument is that many of the large corporations typically courted by big Prides have policies to not support political events. However, there’s more than a little irony here given that Pride is rooted in a history of protest and defiance.

According to the march organizers’ mission statement:

Just as we did in 1970’s first LGBTQ+ Pride, we are going to march in unity with those who believe that America’s strength is its diversity. Not just LGBTQ+ people but all Americans and dreamers will be wrapped in the Rainbow Flag and our unique, diverse, intersectional voices will come together in one harmonized proclamation.

Pendleton, for one, doesn’t seem all too concerned about the stifled sponsorships.

Only one sponsor, Nissan, has committed to maintaining its sponsorship this year.

With nearly two months until the event, we may also see new sponsors popping in because of the political angle this year. Either way, it should be an interesting June.

The L.A. Pride Resist March will take place on June 11.