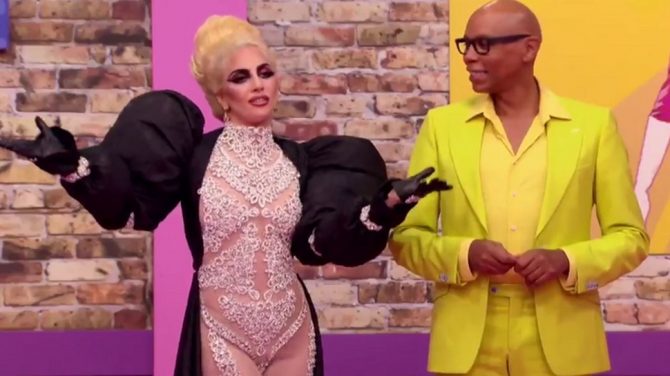 Lady Gaga may have been a guest judge on the premiere episode of RuPaul’s Drag Race season 9, but it seems as though she walked onto the set like she owned the place — in the best way possible.

And really… should we expect anything else?

Season nine winner Sasha Velour and runner-up Peppermint gave the scoop on what it was like having Gaga around the werk room, and revealed how the “Rain On Me” singer defied the show’s producers.

“Lady Gaga seemed to do something unusual and make it a point to come back and connect with us. It seemed as though she was genuinely touched that we had put so much into these tribute looks to her.

“When she came back into the room, she really came back with some constructive feedback and criticism, but that was preceded by a nice, pretty good conversation.

Related: “We don’t have any rules” Sasha Velour on her new streaming show, ‘NightGowns’

“A very honest conversation about what it’s like to be a queen and how she identifies with us and how closely she feels connected to us, and that was something I didn’t expect.”

“Now it’s like, oh, every single episode when a star comes, here’s their walk back, but that was the first time I remember that happened,” she recalled.

Velour added that even when producers tried to wrap things up, Gaga stood her ground and insisted she get all the time with the queens she needed.

“There was even a moment when the producers were kind of like, trying to get her to wrap it up, because she had hand-written notes about each and every one of us, and she went through, took her time, and gave individual feedback to each of us sitting right there.

Related: This ‘Drag Race’ star will never appear on ‘All Stars’ again after this Twitter thread

If any celebrity was destined to leave their mark on Drag Race, it seems more than fitting that it should be Lady Gaga.

Check out her emotional sit-down on Untucked below: