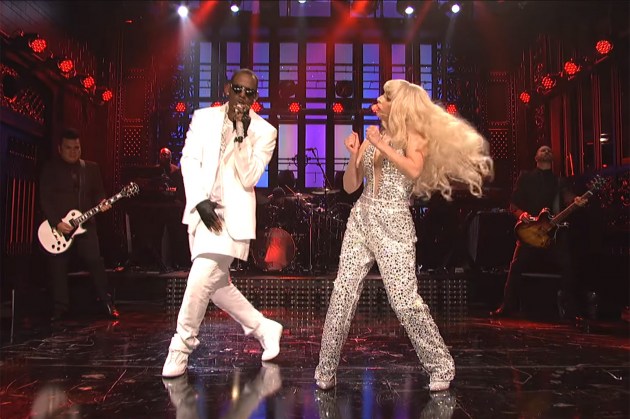 Unless you’ve been living under a rock, you’ve probably heard about the Lifetime docu-series Surviving R. Kelly, which includes detailed allegations of the R&B artist’s sexual and psychological abuse of young women.

Last week, the series’ executive producer Dream Hampton said bisexual pop star Lady Gaga had refused to offer a comment for her series, despite having collaborated with R. Kelley in the past.

But Gaga has finally spoken out against Kelly and pledged to remove their 2013 collaboration, “Do What U Want,” from music streaming services.

In a recent Instagram story, Gaga wrote, “I stand behind these women 1000%, believe them, know they are suffering and in pain, and feel strongly that their voices should be heard and taken seriously. What I am hearing about the allegations against R. Kelly is absolutely horrifying and indefensible.”

She continued, “As a victim of sexual assault myself, I made both the song (‘Do What U Want’) and the video at a dark time in my life, my intention was to create something extremely defiant and provocative because I was angry and still hadn’t processed the trauma that had occurred in my own life.”

Gaga then explained, “I think it’s clear how explicitly twisted my thinking was at the time. If I could go back and have a talk with my younger self, I’d tell her to go through the therapy I have since then, so that I could understand the confused post-traumatic state I was in — or if therapy was not available to me or anyone in my situation—to seek help, and speak as openly and honestly about what I’ve been through.”

“I can’t go back, but I can go forward and continue to support women, men, and people of all sexual identities, and of all races, who are victims of sexual assault. I have demonstrated my stance on this issue and others many times throughout my career. I share this not to make excuses for myself, but to explain. Til it happens to you , you don’t know how it feels. But I do know how I feel now.”

She then wrote, “I intend to remove this song from iTunes and other streaming platforms and will not be working with [Kelly] again. I’m sorry, both for my poor judgement when I was young, and for not speaking out sooner. I love you.”

Here is a screenshot of her statement: 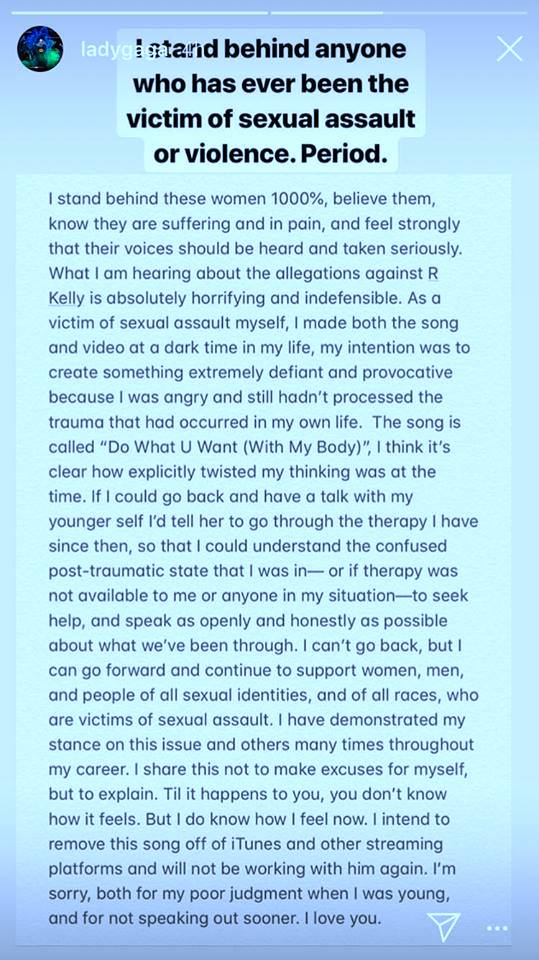 During the 2016 Academy Awards, Gaga sang her award-nominated song, “Til It Happens to You,” a track she wrote for the 2015 documentary The Hunting Ground, a film about rape at U.S. college campuses. During her performance, 50 sexual assault survivors joined Gaga onstage while she played the emotional track.

Here is the Gaga/Kelly collaboration, “Do What U Want”:

The docu-series alleges that R Kelly has had numerous sexual relationships with female minors and using coercive methods to keep his underage partners quiet. Kelly’s lawyer has threatened to sue calling the series “full of lies.” Nevertheless, it has compelled the district attorney of Fulton County, Georgia to open a new investigation into Kelly’s alleged abuses.

Subscribe to Queerty for a daily dose of #entertainment #ladygaga #r.kelly stories and more