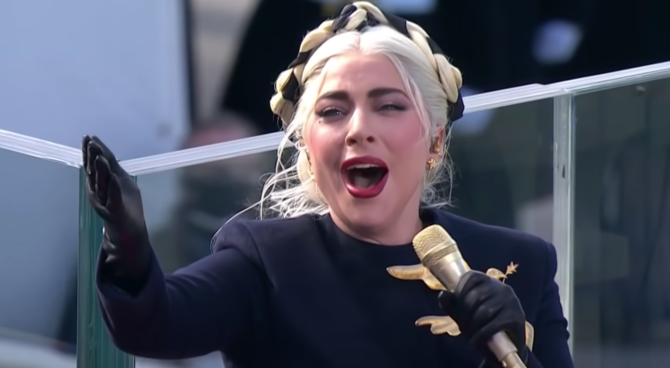 For well over a decade, Stefani Joanne Angelina Germanotta, aka Lady Gaga, has been championing LGBTQ rights. She’s also never been one to shy away from politics, sticking up for those who are different, and celebrating kindness and inclusion.

And with that in mind, her performance of the national anthem at President Joe Biden‘s inauguration in January was so much more than a musical formality — it was the perfect representation of optimism and hope returning to national politics and culture. Boy, did we ever need it.

Of course, it helped that she absolutely slayed the song, but would you expect anything less?

It’s almost hard to remember just how troubling the nation’s mood was in the weeks leading up to January 20, 2021, the day Joe Biden officially assumed office after four years of Donald Trump.

While we were still in the worst part of a pandemic that had claimed hundreds of thousands of American lives, former President Trump was refusing to accept that he’d been voted out and on January 6, we all saw the violent consequences of his rhetoric when the U.S. Capitol was overrun by an angry mob.

So when Gaga made her way down those same Capitol steps looking like she’d won the Hunger Games in a red Schiaparelli Haute Couture gown accented with a golden dove symbolizing peace and belted out a stunning rendition of the national anthem, it felt like a triumph.

Throughout her meteoric career, Gaga has been a loud and active advocate on issues important to LGBTQ folks.

She even has her own non-profit, the Born This Way Foundation, which promotes youth empowerment and combats bullying.

The singer and actress has also always been honest about being bisexual herself, famously discussing it with Barbara Walters during a 2009 interview.

During a surprise appearance at Stonewall in New York City to celebrate the 50th anniversary of the LGBTQ rights movement, she told the crowd:

“I will not stop in pursuit of this liberation. I wish to see no more homeless youth from this community. I denounce ostracizing people for who they are. I wish for there to be mental health provided around the country to teach people the importance of kindness, compassion, every race, every religion, every color, every age.”