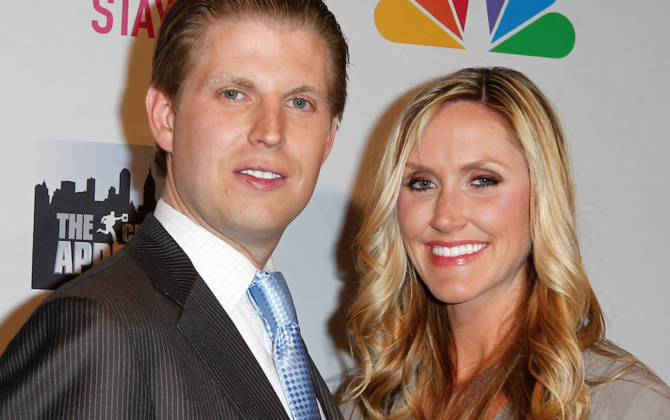 Lara Trump showed off a new accessory on Instagram recently, and it appears she has as much class as the family she married into.

In a video posted to Eric Trump‘s Instagram story, Lara can be seen with a clutch purse bedazzled with the letters “FJB,” an abbreviated curse at President Joe Biden.

The rest of the video isn’t any better. Eric starts out by filming a gas pump with a sticker blaming Biden for higher prices. Then he moves to his SUV, where Lara smirks and shakes her head from the passenger seat.

The exercise in stupidity is set to the tune of “Lets Go Brandon” by Loza Alexander, naturally.

Biden has faced criticism over gas prices, mostly by people like Eric and Lara who are either uninformed, or just relishing the opportunity to blame the president for any and everything.

According to a CNBC report, “the root cause of today’s high gas prices isn’t politics: It’s financial pressure on oil companies from a decade of cash-flow losses that have made them change financial tactics. Investment in new wells has dropped more than 60%, causing U.S. crude oil production to plummet by more than 3 million barrels a day, or nearly 25%, just as the Covid virus hit, and then fail to recover with the economy. For an oil-drilling sector that lost 90% of its stock value from 2012 through early last year, it hasn’t been the toughest call in the world.”

“You’ll never be accused of being classy, that’s for sure,” observed one Twitter commenter.