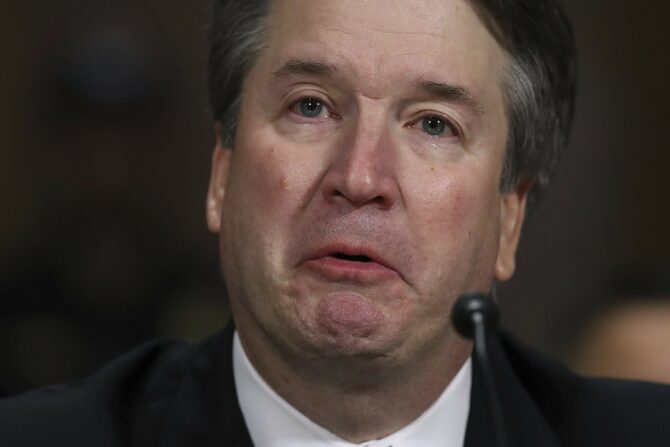 While testifying before the U.S. Senate Judiciary Committee during an FBI oversight hearing yesterday, FBI Director Christopher Wray was asked by Sen. Sheldon Whitehouse about the 2018 investigation into then-Supreme Court nominee Kavanaugh and accusations that he tried to rape Dr. Christine Blasey Ford at a party when they were teenagers.

Related: Brett Kavanaugh forced to skip dessert, flee out the backdoor of steakhouse to avoid protesters

Wray said that Trump’s White House ordered the investigation into Kavanaugh before he was confirmed to the Court. As part of its investigation, the FBI set up an anonymous hotline and received roughly 4,500 tips from callers. Of course, all this has been reported before. But here comes to kicker…

Rather than looking into those 4,500 tips, which is what the American public was told would happen, Wray said the FBI just forwarded some of them onto the Trump White House. From there, the ex-president’s camp hand selected who the bureau could interview for its investigation. Wrey didn’t say exactly how many interviews were ever conducted, but considering the whole thing was wrapped up in a week, it couldn’t have been that many.

“When it comes to the tip line, we wanted to make sure the White House had all the information we had, so when the hundreds of calls started coming it,” he testified. “We gathered those up, reviewed them, and provided them to the White House—”

To which Wrey responded, “We reviewed them and then provided them to the White House.”

“You reviewed them for the purposes of separating from tip line traffic but did not further investigate the ones that related to Kavanaugh, correct?” Whitehouse asked.

“Is it also true that in that supplemental BI [background investigation], the FBI took direction from the White House as to whom the FBI would question and even what questions the FBI could ask?” Whitehouse then inquired.

“So it is true,” Wrey confirmed.

Sen. Whitehouse grills Director Wray's about how the FBI handled its sham investigation into Brett Kavanaugh during his confirmation process pic.twitter.com/IrfFrbYQEO

Basically, Trump wanted to get Kavanaugh confirmed ASAP, so he made sure no witnesses or corroborating evidence that might bolster Ford’s testimony ever saw the light of day. The week-long investigation was rigged from the start. And that comes straight from the FBI Director’s mouth.

As we all know, Kavanaugh was confirmed to the Supreme Court in a 50-48 vote by the Senate, and he has since gone on to rule against protections of LGBTQ people in the workplace and to strip away abortion rights.

In 2020, Trump said he “saved” Kavanaugh from a life of mediocrity, telling author Michael Wolff, “There were so many others I could have appointed, and everyone wanted me to. Where would he be without me? I saved his life. He wouldn’t even be in a law firm. Who would have had him? Nobody. Totally disgraced. Only I saved him.”

Since Wrey’s testimony yesterday, there have been renewed calls for him to resign from the FBI and for the investigation into Kavanaugh’s alleged sex crimes to be reopened and for the SCOTUS justice to be impeached.

The FBI better get off their text deleting asses and open a real investigation into Brett Kavanaugh.

So are all those Kavanaugh related documents still available? Or did the Trump administration destroy them as well?

Or did the FBI destroy them itself?

Asking for the nation.

FBI Director Christopher Wray needs to be fired and Brett Kavanaugh should be impeached. This shit has gone on long enough.

And then he voted to give rapists more control over women’s lives.

This is why the women protest. https://t.co/Sph72HxoOW

Didn't we read, Brett Kavanaugh has 84 ethics complaints against him that were were simply dropped once he became a Supreme Court justice?

What was the point of the FBI investigation if none of the information was going to get back to the people who were trying to decide if Kavanaugh should be confirmed. We knew then Trump wouldn’t release any pertinent information.

SCOTUS' ruling opened the door to make abortions illegal even in cases of rape and sexual assault.

In other words, Brett Kavanaugh is ready to be a father again.