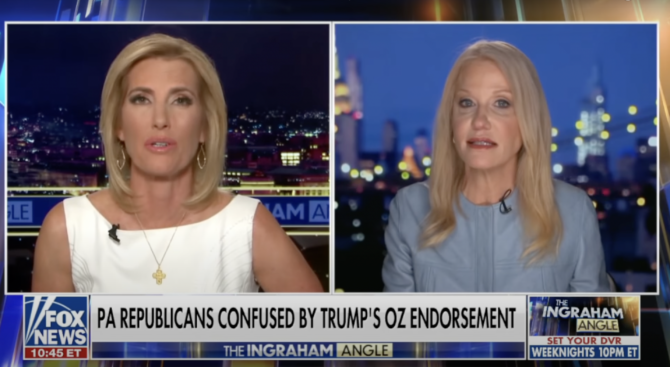 Laura Ingraham and Kellyanne Conway had a rather uncomfortable exchange on Ingraham’s Fox News show this week.

It all started when Ingraham brought up Donald Trump‘s recent endorsement of Dr. Oz in the GOP Pennsylvania Senate Primary.

“Do you think the Trump endorsement of Oz was a mistake?” Ingraham asked Conway during Tuesday evening’s broadcast.

The ex-president endorsed the TV doctor last Saturday during a rally in Selma, North Carolina, touting him as a candidate who’s “smart, tough, and will never let you down.”

The endorsement has confused many in the Republican party and led to a vocal backlash from people on the extreme right, who feel Oz is too liberal. Not to mention, he’s a Muslim.

Despite the fake smile painted on her face, Conway, who has endorsed Oz’s opponent David McCormick, clearly didn’t want to answer the question.

“President Trump’s endorsement in these Republican primaries is a highly sought-after and deeply consequential piece of political currency,” she began. “So many people want it they make the trek to Mar-a-Lago–”

“Was it a mistake, Kellyanne?” Ingraham interrupted.

Related: Laura Ingraham’s gay brother slams her for being a “Putin-loving monster” who hates LGBTQ people

Conway, still smiling but clearly growing uncomfortable, continued to dodge the question for another 30 seconds or so while Ingraham, growing more and more frustrated, continued to grill her.

“You wouldn’t answer the question whether it was mistake,” the Fox News host eventually said. “I think it was a mistake to endorse Oz. I’ll say it, I’m not afraid to say it. It was a mistake.”

Here’s how folx on Twitter reacted to the exchange…

That was awkward. ? @KellyannePolls @IngrahamAngle #DrOz

what’s to be confused about? he endorsed Dr. Oz because Oz was on tv. that is literally the only reason. no deep analysis required.

@KellyannePolls just shit the bed on @IngrahamAngle what a joke…. Total gaslight. Don't believe everything you see and hear with your own eyes and ears. Go away…. Trump fucked up with the endorsement… let's move on.

Why would a con artist endorse a snake oil doctor?, it’s pretty obvious, I think.

It’s time for bed when I agree with Laura Ingraham as well as empathize with her frustration of trying to get Kellyanne Conway to answer a question.

Who would have ever guessed? The host of the apprentice endorses the host of Dr. Oz #Republicans

So did Kellyanne finish raising her children then? That was quick.

What’s the price for a Trump endorsement? Everyone knows that there are strings attached.

Birds of a feather pic.twitter.com/eRCzpJjLkR