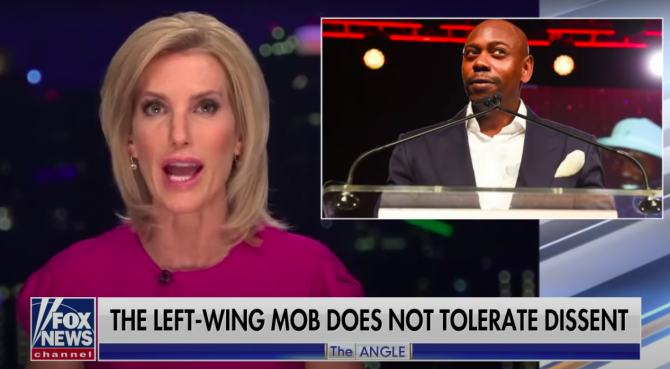 As a general rule of thumb, you know you’re probably in the wrong if Laura Ingraham is coming to your defense. And that’s just what happened to comic Dave Chappelle.

Chappelle is once again under fire for making transphobic remarks in his new Netflix special, including declaring himself “Team TERF!” (the acronym for trans-exclusionary radical feminist), voicing his support for transphobic author J.K. Rowling, and talking obsessively about trans women’s genitalia, among other things.

GLADD, National Black Justice Coalition, and several other civil rights groups have all issued statements condemning his transphobia and urging Netflix to pull the special from its platform, and former Dear White People showrunner Jaclyn Moore, who transitioned during the pandemic, said she’s “done” working with Netflix “as long as they continue to put out and profit from blatantly and dangerously transphobic content.”

One person who is squarely in Chappelle’s corner, however, is Ingraham, who defended him last night on her show, saying he’s just another victim of the woke liberal “mob” and transphobia is awesome and blah, blah, blah, blah, blah.

“The mob never sleeps,” she proclaimed. “The same left-wing forces that built them up are trying to tear them down!”

She continued, “The fact is there is no satisfying the insane left that today’s Democrat Party’s spawned and projects. There’s no point in anyone trying to placate them or even paying attention to them, because there will always come a day when you’ll fall short of their constantly moving woke goalposts.”

“Unless you are 100% compliant and ready to compromise your beliefs for every leftist crusade, they will eventually come for you anyway. Just ask Dave.”

It’s interesting Ingraham is defending Chappelle, considering he called her a “b*tch” and a “c*nt” just last year after she made racist remarks about LeBron James. But apparently she’s willing to overlook all that if it means they can bond over their shared hatred of trans people and Democrats.

Chapelle has responded to the latest backlash by saying, “If this is what being canceled is like, I love it. F*ck Twitter. F*ck NBC News, ABC News, all these stupid-ass networks. I’m not talking to them. I’m talking to you. This is real life.”

You know what else is real life? The fact that 2020 marked the most violent year on record for attacks on trans and gender non-conforming people, according to the HRC. Sadly, 2021 is shaping up to be about as bad. The majority of victims are Black and Latinx trans women. And Chappelle’s incessant attacks on them are definitely not helping.

Watch Ingraham’s defense of Chappelle below. Or don’t.