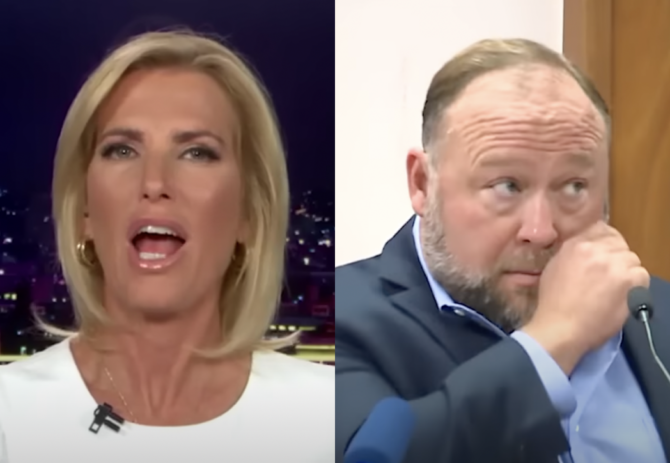 Related: Alex Jones is getting destroyed in court so badly, even the judge is tearing him apart

“If the National Inquirer had a TV show, this would be it folks!” Curtis tweeted. “You’d think Fox would be on high alert following Alex Jones’ legal comeuppance.”

Jones, of course, was just ordered to pay $45.2 million in punitive damages plus another $4.1 million compensatory damages to the parents of children killed at Sandy Hook Elementary School for peddling discredited conspiracy theories about the 2012 mass shooting.

If the National Inquirer had a TV show, this would be it folks! You'd think Fox would be on high alert following Alex Jones' legal comeuppance. @IngrahamAngle @FoxNews https://t.co/Vr5oMzRY7Z

The tweet included a segment from Friday night’s episode of The Ingraham Angle in which the 59-year-old boxed blonde accused “homosexual deviants” and “lefty lawmakers” of trying to “sell perversion” with drag queen story hours.

Related: Laura Ingraham’s gay brother slams her for being a “Putin-loving monster” who hates LGBTQ people

The segment then devolved into some transphobic nonsense in which Ingraham reported on a “strange male being” spotted in a YMCA locker room before ranting and raving about how Title IX now allows for “men who identify as women” are now allowed full access to women’s restrooms.

Here’s how others are responding to the truly vile segment…

Raise your hand if you are hoping and praying for Laura Ingraham to become the next Alex Jones lawsuit! https://t.co/daqcTzeeKq

You are a vile, horrible soul, Laura. You spread lies and sensationalism with the only goal to repress people. Why are you like this?

Like a Roger Ailes or Bill O’Reilly type perversion?

🤥🤡Yet the ones arrested are always Republican officials and youth pastors these days. Weird how they’re all closeted Democrats.

What is “sick” is right-wing extremist Republicans telling parents what is best for their children.

The only thing perverted is you trying to make this about perversion.

Republicans have no plan. No platform, so you peddle in non issues. Try doing something useful for your viewers instead of making them fearful & angry over a non issue.

Once again, Laura and Fox, parade their hate, lies and misinformation as some kind of red meat that appeals to the corrupted morality of their viewers.

No wonder her family hates her