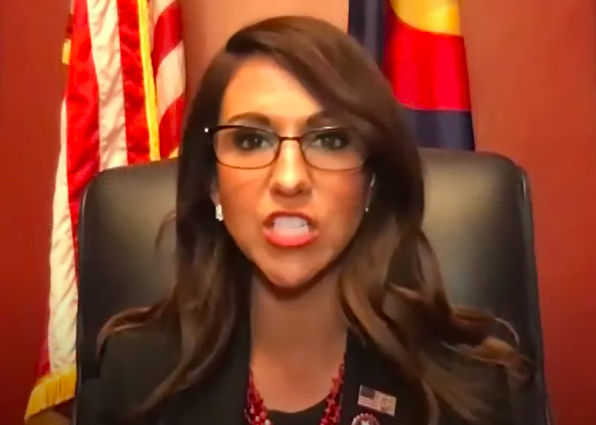 Republican lightning rod and “QAnon congresswoman” Lauren Boebert is not having a great day on Twitter. The hashtag #LaurenBoebert4Prison has been trending all morning and it doesn’t appear to be letting up.

So what did the newly elected antigay congresswoman from Colorado do this time, you wonder? Turns out, a number of things! Which is why folx want her behind bars.

Some are once again raising alarm bells over the string of problematic tweets she wrote on the morning of January 6, just hours before domestic terrorists stormed the U.S. Capitol with the intention of kidnapping and murdering elected officials.

I can definitely get behind #laurenboebert4prison. I've been pointing this out all along. She KNEW before, and was in on, the insurrection of the Capitol pic.twitter.com/BebBaYfTLA

Lauren Boebert should get 4 consecutive sentences of 1776 days in prison for her involvement in the Jan 6th insurrection. #laurenboebert4prison

Remember that Lauren Boebert was tweeting to the right wing Republican domestic terrorists during the attack on our Capitol.#laurenboebert4prison pic.twitter.com/lYpv5pOLMK

Please do not forget Lauren Boebert tweeted Nancy Pelosi’s location during the insurrection. I would love to get my hands on this dum dum’s phone records from January 6. #laurenboebert4prison pic.twitter.com/NN7BRFYhuQ

#laurenboebert4prison is trending because
1 – she held a tour of the Capitol Jan 5, 2021
2- she disclosed Nancy Pelosi had been removed from the senate chamber
3 – she is an #Seditionist #insurrectionist and #traitor IMO

Why the fuck isn't she in prison yet?

One of these people is a terrorist.

Only one of the people in this picture was literate.

And then there are those who are still suspicious about that alleged “tour” she gave to a large group of people just days before the insurrection. (Boebert has denied the accusations and called the whole story “categorically false.”)

Who tore out those panic buttons? Did it happen during a tour of the Capitol?#LaurenBoebert4Prison https://t.co/nWEH4RhaAN

Lauren Boebert is responsible for the Jan. 6th attack. She revealed the Speaker of the House's location and took rioters on a tour the day before #laurenboebert4prison

Since assuming office on January 3, Boebert has been no stranger to controversy. When she’s not bragging about bringing her gun to work and refusing to comply with Capitol police, she’s firing off tweets mocking gender inclusivity and whining about cancel culture.

Most recently, Boebert drew criticism for accusing Democrats of being “obsessed with conspiracy theories” and complaining about the heightened security measures at the U.S. Capitol.

Speaking to Fox News over the weekend, she called the fences and the metal detectors “bonkers” around the premises and said there is “clearly not a threat” to anyone’s safety.

Boebert complains that “no one on the outside” can get inside the Capitol and claims the Democrats are obsessed with with conspiracy theories pic.twitter.com/2GWxEkZr0k