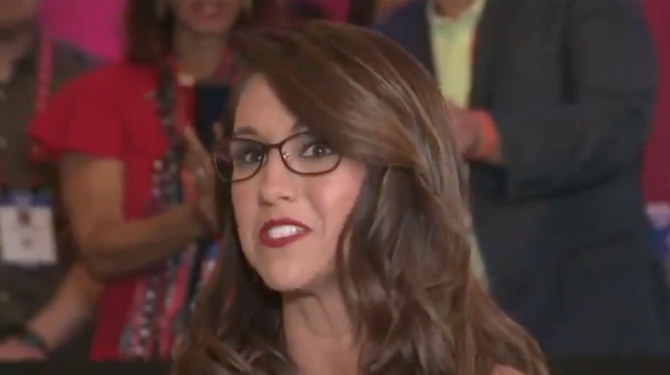 QAnon congresswoman Lauren Boebert kicked off Pride season this year by blasting LGBTQ equality, accusing Democrats of being “groomers”, and getting into a fight with Randy Rainbow on Twitter. Now, on day three of Pride month 2022, she’s continuing her campaign of hate by rage-tweeting about queer kids.

“The same Democrats who think 18-year-olds can serve in the military but are too immature to buy guns also want 16-year-olds to vote and 6-years-old to be able to identify as the opposite gender. Make it make sense,” QBert tweeted earlier today.

The same Democrats who think 18-year-olds can serve in the military but are too immature to buy guns also want 16-year-olds to vote and 6-years-old to be able to identify as the opposite gender.

We’re not going to waste too much time dissecting Boebert’s argument here because, honestly, why bother? There is no argument. Comparing military service, guns, and voting rights to gender identity is a false equivalence.

Of course, critical thinking has never been her strong suit, as evidenced by the fact that she never graduated high school and didn’t complete her GED until 2020. Clearly, she still has a lot of learning to do.

I want to debate you. Please. It will be so much fun.

The same party who thinks 18-year-olds are old enough to purchase two AR-15s and 1,700 rounds of ammunition also thinks a 6 year old is old to enough to marry but not old enough to hear the word “gay”.

A 18 year old in the military background has been checked Bobo .

Do you need someone to say it slowly for you?

Yeah. We’re wild. We even want people to graduate high school at 18. Ahem. 😏

We’ve been asking ourselves the same question since you got into office: make it make sense

You’re conflating a bunch of unrelated things here to make some sort of ridiculous point. Another name for that is noise. Obnoxious mind numbing noise.

Why can’t we fill this Congressional seat with someone who doesn’t have a rap sheet?

Boebert’s hate for all things LGBTQ is nothing new, of course. In addition to opposing same-sex marriage and comprehensive sex ed, she opposes the Equality Act, saying it promotes “supremacy of gays”, and claims trans women steal scholarships and sports opportunities away from biological women.

She also wants to ban federal funding of research and publications into gender-affirming treatments for trans youth, calling it “horrific sexual research.” And she believes people should not be able to legally come out until they are 21 years old.