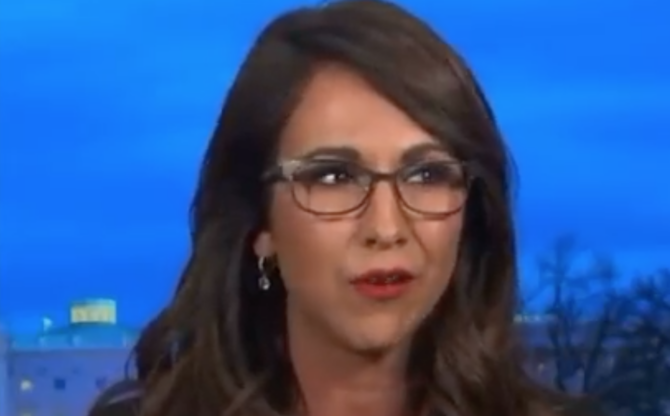 Hot off the heels of shamelessly heckling Joe Biden during the State of the Union address last week, Rep. Lauren Boebert (R-Colo.) is out in the public square trying out new, equally cringey insults aimed at the president.

She may have wanted to practice a bit more first, though.

Appearing on Fox News, Boebert appeared to overheat and short-circuit as she attempted to get her soundbite out.

“But they’re taxing us into poverty,” she added.

Here’s what people are saying:

Prince John and the Gazpacho Police. You dozy bump, you do bring the unintentional humor to the geopolitical table, as it were. @laurenboebert https://t.co/TvQsyjF9fj

Prince John didn't escape the Bowling Green Massacre & evade the Gazpacho Police to be disrespected like this.

I am Prince John and I hearby declare #LaurenBoebertIsSoDumb.#PrinceJohn out. pic.twitter.com/jOFmvI0tiD

Lauren Boebert said "I don't know who is running the federal government these days, Joe Biden or Prince John."

A lot of people are mocking her since there is no Prince John, but I believe that Lauren Boebert is being honest that she does not know who runs the federal government.

Has anyone dispatched the Gazpacho Police to locate Prince John? ?

Boebert later clarified that she was referring to Prince John of Disney’s Robin Hood, a character who taxed the poor.

“For the record, Prince John > Joe Biden,” she tweeted Wednesday morning, along with a cartoon visual aid:

Boebert has been vocal (obnoxiously so, arguably) about the need to increase American fossil fuel production in the wake of banning Russian oil imports. At the State of the Union, she wore a jacket emblazoned with the phrase “drill baby drill.”

And earlier on Tuesday, she tweeted: “Cutting off Russian oil is the right move. Doing so without increasing American energy production is insanity.”

On Monday, executives at some of the world’s biggest oil and gas producers said they’re doing just that, ramping up crude production.

The Biden administration has also initiated talks to potentially ease sanctions on Venezuelan oil, a controversial move given the fact that the country is run by an authoritarian regime.

Boebert appeared to try and burn Biden on this, too, as her first attempt went so well.

“Here’s Biden’s energy policy: Anyone but America,” Boebert said. “OPEC, Venezuela, you name it. If it’s not American energy, Joe doesn’t want it.”