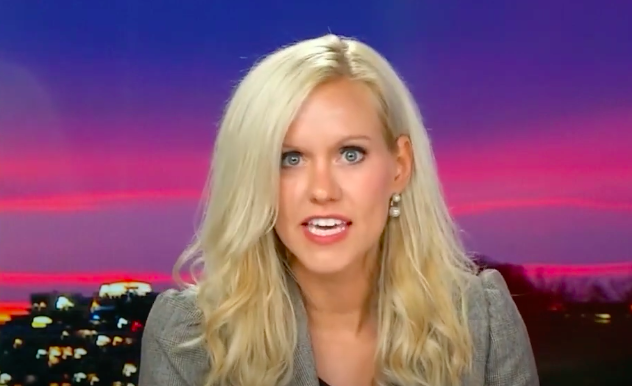 We first covered Lauren Witzke back in 2020, when she was the Republican nominee in Delaware’s U.S. Senate election.

During her campaign, Witzke claimed to be an ex-heroin addict who used to work for the Mexican drug cartel before getting clean and devoting her life to Christ. Aftering losing the election to incumbent Democrat Chris Coons by over 20 points, she faded into obscurity. Until now.

This week, Witzke went on CrossTalk to sing Putin’s praises as he defied international law by launching a deadly full-scale attack on Ukraine.

Related: Admitted ex-drug-runner with an arrest record for meth and heroin wins GOP nomination for senate

“Russia is a Christian nationalist nation,” she said. “I actually support Putin’s right to protect his people and always put his people first, but also protect their Christian values.”

The 34-year-old continued, “I identify more with Putin’s Christian values than I do with Joe Biden. Christian nationalist regimes are also a threat to the global regime, like the luciferian regime, it wants to mash everything together. But Putin takes care of his people. He looks out for his people.”

Lauren Witzke, the Delaware GOP's candidate for Senate in 2020, has nothing but praise for Putin and "his Christian nationalist nation": "I identify more with Putin's Christian values than I do with Joe Biden." pic.twitter.com/oQ2nhlVGCR

To be clear: Putin didn’t invade Ukraine to protect Russia’s “Christian values.” The vast majority of Ukrainians identify as Christian. A 2018 survey conducted by the Razumkov Centre found that 71.7% of the population declared themselves followers of Christ. This is not a religious war.

Witzke’s remarks are vile and offensive, but they’re not the least bit surprising when you consider she also believes cannibalist pedophiles are secretly controlling the world order and that Donald Trump was sent by God to expose them.

In the past, Witzke has also called trans people “demonic”, “sexual predators”, and “mentally ill”, all the while saying the GOP shouldn’t allow any LGBTQ people into the party. She called one gay male conservative a “Satan’s favorite sodomite” and another a “subversive pervert.” And she tried to start a movement encouraging Christians to “reclaim the rainbow” by turning June into “Christianity month”.

Since gushing over Putin, Witzke has received harsh criticism on Twitter. Here’s what people are saying…

Lauren Witzke says Putin takes care of his people.???
Is she aware of the level of poverty in Russia? 73% of the pop don't have passports. No freedom of speech. No free and fair elections. And so on …? https://t.co/mv5h507en3

Lauren Witzke, a Republican candidate who has been arrested for heroin and methamphetamine in the past, says she identifies more with Putin's Christian values than Biden's. https://t.co/ZGe8gsga6E

Lauren Witzke is smoking the good stuff. 48% of Russians have been polled to be atheists. It is a secular state with a secular constitution which still uses the Soviet anthem. And Putin is the authoritarian head of the Russian mafia.

This is really all you need to know about Lauren Witzke & her opinions about anything #PutinsPuppet pic.twitter.com/LSh5jydo0x

Lauren Witzke is a vile attention thinking baboon. She prefers Putin over Biden because of Putin's Christian values? WHAT? like mass murder and Poison?