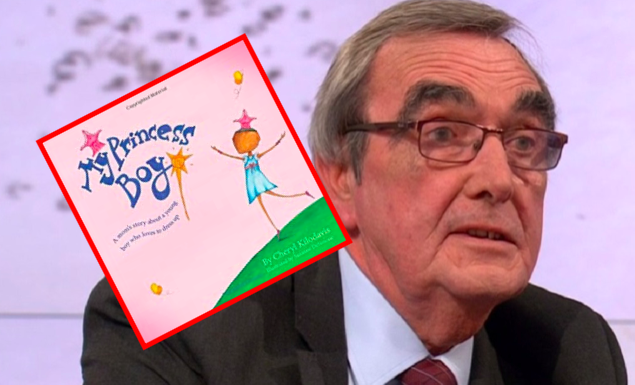 They say you should never judge a book by its cover.

Well, apparently British Labour MP Roger Godsiff didn’t get that memo when he suggested two LGBTQ-themed children’s books be yanked from the shelves of a school library in Birmingham, England.

The 72-year-old admitted in an interview this week that he never actually read My Chacha is Gay, which tells the story of a Pakistani kid with a gay uncle, or My Princess Boy, about a boy who likes to dress up like a princess, when he declared them not “age appropriate.”

Not only did Godsiff not read the books, he’s never held a physical copy of either of them in his hands.

“I don’t know,” he told the Birmingham Mail this week. “I’ve only seen the front page.”

He then went on to say he made his decision to support banning the books based on information he was fed from antigay activists.

“One of the documents I was given by some of the protesters was a cover of one of the books given to children,” Godsiff explained.

Later in the interview, Godsiff, who voted against same-sex marriage in the U.K. in 2013, said he doesn’t think kids under the age of, say… how about… 11?… should be exposed to anything concerning gender or sexual orientation or anything else that falls outside the lines of traditional notions of heteronormativity.

“If you’re talking about gender and sexual orientation… I think, for four and five years olds, I think, to bring in sexualities at that period in time… to a number of parents they would say, I think, that’s too young.”

He continued, “Why don’t you wait for a few years, before 11, in order to bring those subjects up?”

“I think, that is a matter for the school and the parents to discuss when the parents will be comfortable with their child [learning about gay people].”

Godsiff concluded by saying that he has a three-year-old grandson and if he was told about a gay person “he would probably wonder what was going on.”

“It is a highly sensitive issue,” he said.