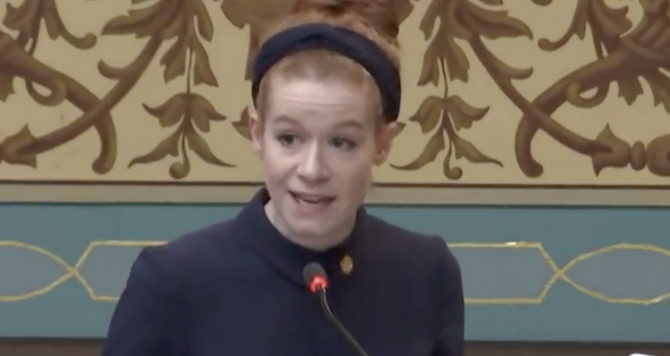 Michigan state Sen. Mallory McMorrow clapped back hard in a viral speech against her Republican colleague’s “hollow, hateful scheme” of labeling LGBTQ allies across the aisle as “groomers” and “pedophiles.”

McMorrow said she was surprised to learn that Republican state Sen. Lana Theis sent out a fundraising email accusing her of wanting to “groom and sexualize kindergarteners.”

“I didn’t expect to wake up yesterday to the news that the senator from the 22nd District had, overnight, accused me by name of grooming and sexualizing children in an email fundraising for herself,” McMorrow said. “So I sat on it for a while wondering: Why me? And then I realized: Because I am the biggest threat to your hollow, hateful scheme. Because you can’t claim that you are targeting marginalized kids in the name of ‘parental rights’ if another parent is standing up to say no.”

Republicans across the country have latched onto the “groomer” attack as they seek to pass a series of bills targeting the LGBTQ community in the name of so-called “parental rights.”

“So then what?” McMorrow continued. “Then you dehumanize and marginalize me. You say that I’m one of them. You say she’s a groomer, she supports pedophilia, she wants children to believe that they were responsible for slavery and to feel bad about themselves because they’re white.”

The speech has been viewed over 10 million times since it was posted Tuesday. “Senator Lana Theis accused me by name of grooming and sexualizing children in an attempt to marginalize me for standing up against her marginalizing the LGBTQ community…in a fundraising email, for herself,” McMorrow wrote in the caption.

She added: “Hate wins when people like me stand by and let it happen. I won’t.”

Senator Lana Theis accused me by name of grooming and sexualizing children in an attempt to marginalize me for standing up against her marginalizing the LGBTQ community…in a fundraising email, for herself.

Hate wins when people like me stand by and let it happen. I won't. pic.twitter.com/jL5GU42bTv

Here’s the email Theis sent to supporters on Monday, which reads in part: “These are the people we are up against. Progressive social media trolls like Senator Malloy McMorrow (D-Snowflake) who are outraged they can’t teach can’t groom and sexualize kindergarteners or that 8-year-olds are responsible for slavery.”

In the email, Theis references her Democratic colleagues walking out of a session last Wednesday after she delivered this invocation:

“Dear Lord, across the country we’re seeing in the news that our children are under attack. That there are forces that desire things for them other than what their parents would have them see and hear and know. Dear Lord, I pray for your guidance in this chamber to protect the most vulnerable among us,” said Theis, who is chair of the Senate Education and Career Readiness Committee.

“The ‘forces’ are, of course, public school teachers, and the ‘things’ are the LGBTQ community,” tweeted Democratic state Sen. Dayna Polehanki. “To pervert the Senate Invocation in this way is beyond the pale.”