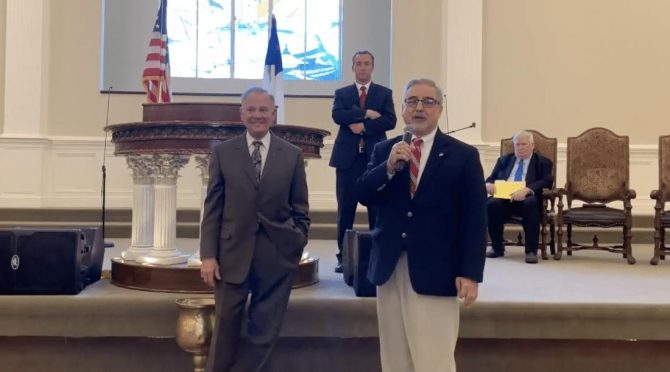 The attorney for Tony Spell, the leader of the Life Tabernacle Church in Baton Rouge, Louisiana, is fighting for his life after contracting coronavirus.

Before developing COVID-19, Jeff Wittenbrink was preparing a legal defense for Spell after the antigay pastor was arrested and charged with six misdemeanors after busing in over 1,800 people for a Sunday service last month.

Spell insisted that “God will shield us from all harm and sickness!” But, so far, God doesn’t seem to be doing a great job at that.

59-year-old Wittenbrink fell ill less than two weeks after attending multiple events at Spell’s church. He tells local media that he’s not convinced he was infected at the church and that he could have easily picked up the virus anywhere.

“I went to Albertson’s twice a day,” he said while hooked up to an oxygen tank in a hospital bed. “I went to Sam’s. I went to Walmart. I went to Lowe’s. I used the gas pumps. I mean I just wasn’t careful. God knows where I got it.”

Um, why was he shopping at all those places to begin with? Also, who goes to the grocery store twice a day ever, let alone during a pandemic?

The lawyer added, “The bad thing is I might have spread (it) to somebody. I feel bad about that.”

Wittenbrink is now the second person associated with Life Tabernacle Church to contract COVID-19. Last week, 78-year-old Harold Orillion, a church regular, died of the virus, though Spell insists the coroner’s finding is “a lie.”

But Spell isn’t letting any of this stop him from 1. continuing to hold church services, and 2. continuing to try and profit off of the pandemic. Just last week, he put out a video encouraging people, even those who don’t belong to his church, to donate their stimulus checks to him.

“Donate your stimulus money,” he said. “If you don’t have a church, give through my website!”

“I’m very proud of Pastor Spell,” Wittenbrink said from his hospital bed. “I think he’s one of the few people who understands we shouldn’t just throw away our civil liberties without a fight just because there’s some kind of crisis going on.”

Yesterday, Wittenbrink took to Facebook to remind everyone to “Breath. Now thank God.”

Here’s hoping Wittenbrink makes a full recovery and that, afterwards, he has a good hard think about some of his recent life choices.