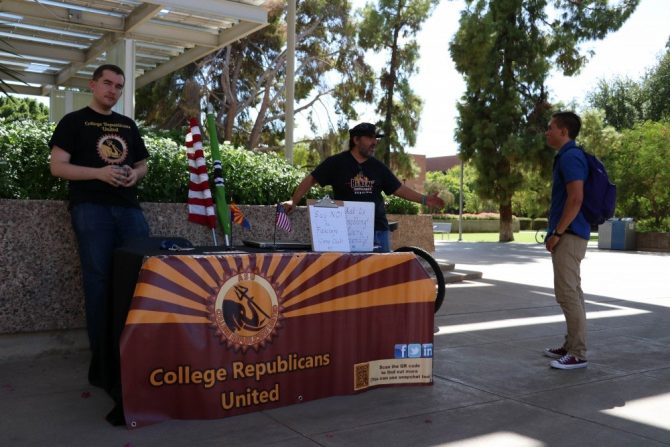 A conservative student group at Arizona State University is being investigated after a 19-page dossier highlighting recent homophobic, anti-Semitic, and racist remarks made by some of its members leaked online.

Screenshots of online chats and other social media posts from the dossier were obtained and published by Phoenix News Times, which reports:

The group’s founder, ASU senior Richard Thomas, has already come under criticism for social media posts saying transgender people have mental illness and that Muslims should be deported, among other offensive comments.

Among the remarks made by Thomas in the dossier include a Facebook Messenger chat where he refers to homosexuality as “degeneracy” and a “choice.”

“I don’t believe homosexuality or this level of degeneracy is biological,” Thomas wrote. “It’s a choice.”

“The ancient Spartans were all f*cking each other because it was in the culture same thing for feudal Japan a lot of them were bisexual.”

Other comments made by Thomas include:

Texts written by another former CRU member, Kevin Decuyper, who graduated from ASU in 2017, also surfaced.

When Decuyper posted a picture of himself with right-wing commentator Candace Owens, someone named Austin Wilcox asked: “What’s with the n*gger in your profile picture?”

To which Decuyper replied, “I work in state politics and co-founded a right wing organization that’s already called Nazis/alt-right regularly so it helps me a lot to be camouflaged and low key on my public profile because it helps to have the support of the right wing community who thankfully don’t know my more extreme views.”

In a statement, CRU called the article a “hit piece” and accused the Phoenix News Times of publishing “cherry-picked excerpts out of context” from its members’ private chat histories.

Meanwhile, in tweet posted last week, the university says its investigating the matter to see if any violations of the student code of conduct have been committed.

The New Times reporting marks the first time the university has been made aware of these alleged statements. We are investigating, because we take these matters extremely seriously. If a violation of the student code of conduct is found it will be dealt with.