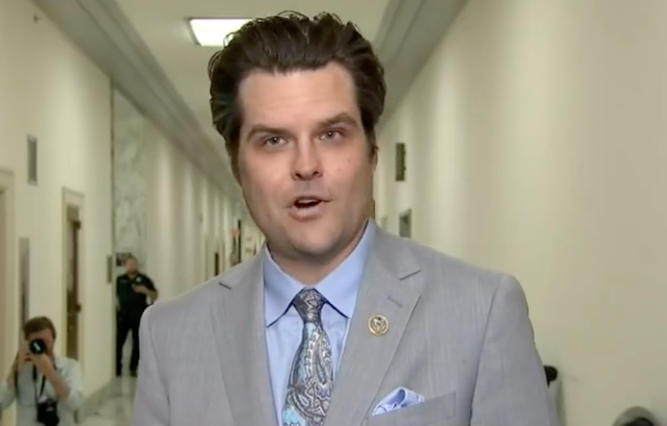 Another day, another damning report about Matt Gaetz. And this time it includes an email receipt.

Over a dozen of the antigay lawmaker’s former classmates from William & Mary Law School spoke to Business Insider about his underage sex trafficking scandal and why, while they’re certainly disgusted by the whole thing, they’re not the least bit shocked or surprised.

“Am I surprised he’s partying with people or doing that kind of stuff?” one person said. “No.”

Gaetz graduated from the well-regarded law school in 2007. Insider spoke with 14 of his former classmates and acquaintances, “most of them spoke on condition of anonymity to protect personal and professional relationships,” with the publication adding, “One former law-school classmate regularly trolls Gaetz on Twitter by welcoming the congressman’s critics to the ‘Matt Haetz Society.'”

Matt Gaetz law school class wants him to resign and wants all his critics to join them in the Matt Haetz Society???that is brutal. #TimesUpMattHaetz

According to pretty much all of them, Gaetz spent the majority of his law school days partying and getting wasted.

“As a law student, Gaetz lived in a large multi-bedroom house near campus, more luxurious digs than the cramped apartments where some of his classmates lived,” the report reads. “He often hosted friends there to play cards or drink from a keg in the basement.”

One person shared an email he allegedly sent back in 2006 inviting them to a Super Bowl party that promised booze, gambling, and strippers.

“His invitation included specific requests: chips, one-dollar bills, and strippers,” Insider reports while quoting Gaetz as writing, “I may ask you to bring some incidentals (napkins, cups, chips, strippers, ext.).P.S – After entering all of your email addresses it is painfully obvious that I don’t know enough girls – so bring some.” 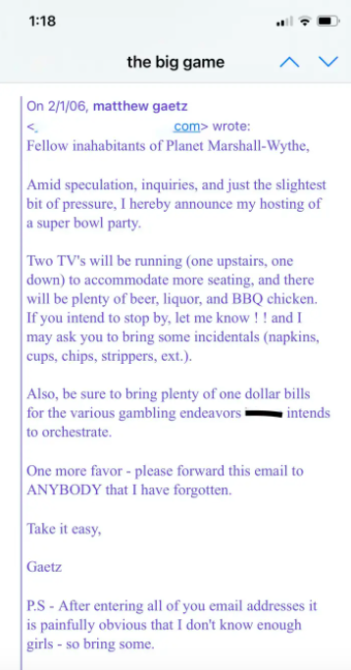 Another person said that Gaetz always had a reputation for being an attention seeking douchebag, but they noted, “He’s more over-the-top now.”

“He’s always been kind of a frat boy,” a source said, adding that he was not “particularly intelligent” but he also wasn’t the dumbest guy in the room.

Their feelings, however, seem to have changed today, with another classmate noting that whenever they see Gaetz’s name trending on Twitter, they brace themselves for the worst.

“Every time The Daily Beast breaks another story on a Friday, it’s like, ‘Oh boy, go check Twitter,'” the person stated, adding that there are now three group chat threads among alumni devoted to sharing updates about their former classmate.

Another person pointed to Gaetz allegedly having sex with a high schooler as an example of his sheer stupidity.

“He has a very high sense of self-preservation,” they said. “I’m surprised he wouldn’t check [her] references.”

More than 500 William & Mary Law School alumni, including 34 people from Gaetz’s graduating class, recently signed a petition calling on him to resign from Congress amid reports federal investigators are closing in on their investigation of him.

Gaetz has denied any wrongdoing and has yet to be charged with any crimes.