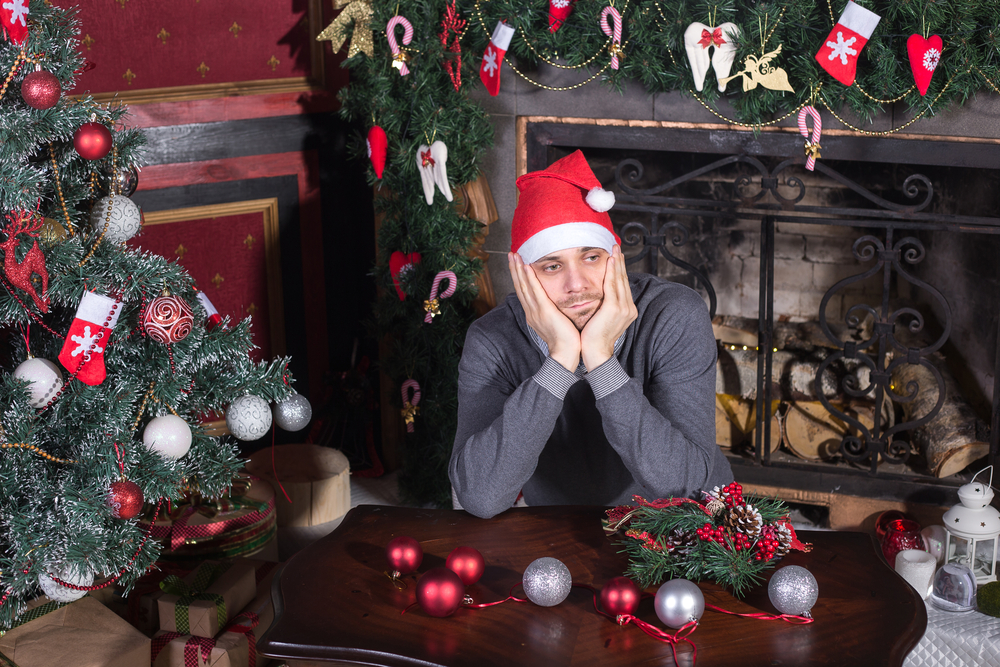 I learned my lesson about asking friends for a Christmas invite 20 years ago.

Alone that year, people told me I needed to reach out to friends, you know, “put yourself out there.” I’m naturally shy and always think I’m intruding, but I got up the nerve and emailed one of my best friends that I had no plans for Christmas day.

She replied, the afternoon of December 25.

“Hope you’re having a wonderful day,” she told me over the phone, while I was sitting alone, in a pile of a half-eaten chocolate Yule Log. I knew she waited till after the fact to respond so she wouldn’t have to acknowledge my Blue Christmas plight.

I’ve spent several Christmases alone since, but, unless asked, I’ve never told anyone that I had no plans.

There’s a few reasons why I’m often alone on Christmas, and I’m sure I’m not the only one. For years, I had a steady boyfriend and, once that happens, you kind of fall out of the social loop. I have a huge family who all live in California (I’m in New York). Unfortunately, it’s not always feasible for me to travel during the holidays. I’ve never been much of a “group” guy, one of those men who have a fabulous group of fabulous gays who do everything fabulous together, and my friends are scattered about. A lot of my close buds today have obligations with their own families. Many of them are now married with children.

If you’re single and older, it often feels like you’ve landed on the Island of Misfit Toys.

This year, I’ll be spending Christmas Day alone again, but a lot has changed in 20 years. It took me a long time to find my Happy Christmas Place and to make the month of December a time to celebrate, not wallow.

It hasn’t been an easy ride. On Christmas day the year after my boyfriend and I broke up, I thought that wandering the streets would cheer me up. Wrong. I walked by 24-hour diners and saw elderly people eating alone, looking glum (I thought “There’s my future”). All the stores were closed, even bars, so there went the notion of finding someplace to revel in Christmas cheer. I ended up in Chelsea and saw young men laughing and singing Christmas carols and realized the gift exchange must have already happened (I thought “and there went my past”). They were probably on their way to big, festive, turkey and stuffing dinners.

I came home and plopped into bed. I almost called my ex but knew that would most likely depress me further.

The next year, I decided that, instead of being a Grinch, I should fake the joy until I made the joy. I bought a small Christmas tree and decorated the apartment to the nines. I think I had three decorations, so a lot of improvising was needed. It helped, even if most of the time I was enjoying the Christmas spirit alone… with my dog.

I grew up in a large family in which Christmas was the biggest day of the year, and I think my inner child needed the festive spirit. It helped. I drew immense pleasure from sending family gifts—I must have been making good money that year—and from watching all of my favorite Christmas movies alone, unencumbered by the usual compromises.

On the actual day I ate every forbidden gym boy sweet on earth, and while friends and family posted about their festive gatherings, I was slipping into a happy sugar coma while watching Cabaret—not a “Christmas Movie” per se, but Liza always rings my bells. As much as I love my relatives, there was something perversely thrilling about not being a part of the holiday drama.

Besides, I had my dog.

Many Christmases have come and gone since that day, all of them varied. I’ve spent some in California, some at friends’ houses, some feeding the homeless, I’ve hosted people over on the day of, and I’ve spent some alone. Regardless, I get a tree every year and enjoy decorating it. I now have so many ornaments that many remain in the box (the tree-trimming party I had one year was an A-Plus way of securing tons of decorations—and the need to start getting bigger trees).

There’s a couple of other traditions I’ve adopted to keep away the holiday blues.

I live in a high-rise building, so every December after the tree goes up I invite everyone on the floor to stop by and celebrate. I also invite a few close friends, especially those I haven’t had a chance to catch up with during the year. The neighbors love it (and hey, they don’t have to worry about drinking and driving), and it reminds me of growing up when suburban neighbors would just drop in for a little cheer. Sometimes I feel as if we’ve lost a bit of the social niceties in the age of smartphones and social media, and I want to do my part in bringing a little bit of that closeness back.

I also go to the movies, alone. While hitting the cinema is a big family deal in the evening, going to an early show is a great way to get the day off to a fun start. The first year I did this I felt that everyone would be staring at me—and not in a good way. But I noticed tons of other people were doing the same thing (I’m fairly certain most of them were not gentiles).

On a similar note, if I know I’m going to be alone on Christmas I tell any Jewish friends who are free to stop by. I started that tradition after a Jewish friend of mine admitted that she hates Christmas day because, despite her religion, she loves the spirit of the holiday and feels like she misses out. She came over one year and brought about five ornaments for the tree. We had a blast and I introduced her to Rudolph and The Grinch. She educated me on the traditions of Chanukah.

I grew up in a non-religious household, and I never thought of Christmas as a religious holiday. Color me blasphemous, because I just thought it meant gifts and fun and being kind to one another and enjoying the lights. I still feel that way, so whoever wants to come by and share in the joy is welcome.

This year, I’m more than likely spending the holiday alone, and I’m prepared.

The tree is up, people have already come by and celebrated, and I’m working on what movie I’ll go see. If people end up stopping by, great. If not, I’ll find something delicious to eat and cheat on my diet with, then settle in for another Christmas tale. (Perhaps it will be Black Christmas!—the original horror classic, of course. The remake is an unholy mess.) Then I’ll pretend to care about the family drama when I get the phone call from home, and crawl into bed, the tree lights creating a beautiful glow.