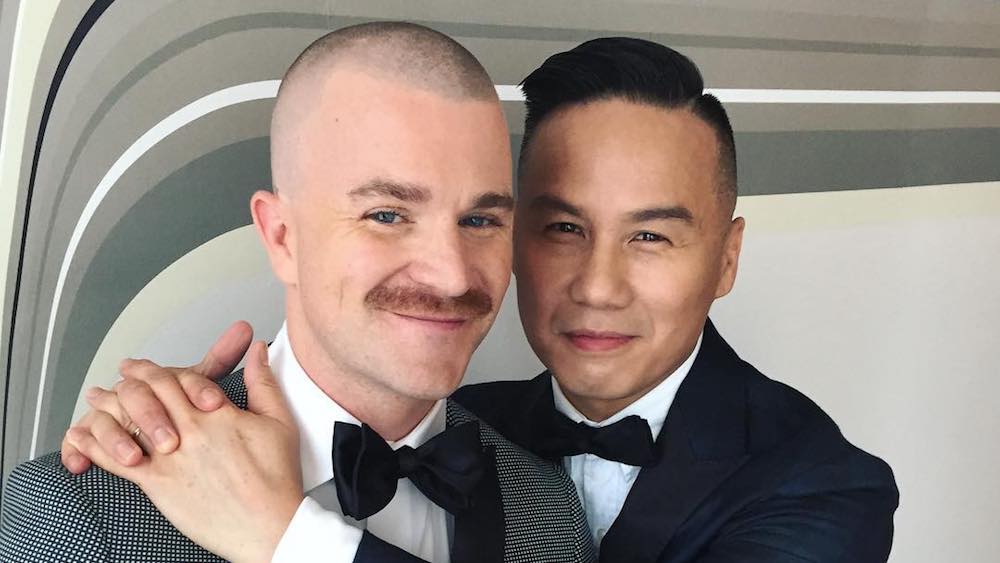 A lot of Wong’s Twitter fans apparently didn’t realize the Asian-American actor is gay. And they’re not only celebrating his marriage but the fact that he appeared on last night’s American Horror Story: Apocalypse as a warlock who played piano for none other than witchy gay music icon Stevie Nicks.

Related: B.D. Wong Never Wants To Forget The Night He Supped With The Obamas

Schnorr posted a shot from their special day along with other shots taken with Wong over the years.

It really kinda is the happiest day of your life. Thanks to my family and friends for the love and words and support and dance moves. Thanks to @msanamatronic for the grooves. Thanks to @kealasettle for the pipes. Thanks to @liachangphotography for the ? Thanks to @wongbd for loving me #schwong

We had a great time last night and I’m endless proud of this man. @wongbd #greatleap @atlantictheater

We don’t need no filter.

2 Happy dudes going to the #emmys

Schnorr’s Instagram account also has many shots of him flexing at the gym and dancing in skimpy swimsuits (we know you are not interested, but we couldn’t help get lost in the account for a few days).

Wong’s fan’s took to Twitter to congratulate the actor on his recent nuptials.

BD Wong just got married to his partner and now I want to cry! I love him so much.

Just heard that @BD_WONG is married and I can't believe I haven't offered congratulations sooner!

I feel dumb, I didn’t know BD Wong was family!

I had no idea BD Wong was gay wow

also we should never forget that this casting lineup is ICONIC.

BD Wong on the piano accompanying Stevie Nicks to “Gypsy” is extremely my shit pic.twitter.com/1pSICbGETy

#BDWong Congratulations to them both! I've always been a fan of him since Law & Order. He's part of the #AHSapocalypse series now. I've always praised this handsome actor for his great craft. @AHSApocalypse_

Congrats to the happy couple! (Oh, and good luck with the Apocalypse, you talented warlock, you.)